Jesus gave us many parables by which to gauge and change our behavior. His story-telling has influenced authors for centuries and explains why we can still find great truths in all forms of fiction. As we approach Halloween we’ll be exposed to many scary classics that, beneath their surface, tell us biblical truths. 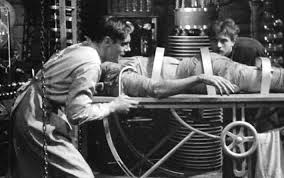 Frankenstein, for example, deals with the human ambition for power. This was such a potent theme in the 1931 cinematic version of Mary Shelly’s novel that one particular scene was censored as being sacrilegious. It’s just after the creature comes to life and the scientist, amazed that his ambition bore fruit, yells out “It’s alive, ALIVE!” The censors closed the scene there. Left on the cutting room floor until it was restored to the film only a few years ago was this line: “At last I know what it’s like to be God!”

A common theme old-school horror movies touch on again and again is the evils resulting from scientists trying to play God. The fame, fortune and glory coming from their work tend to overshadow their original humanitarian intent and blot out the tremendous responsibility they took on with their mission. Disaster ensues. This Sunday’s readings focus on the elements these ambitious scientists always leave out of their formula: sympathy and empathy for their fellow humans.

In our gospel reading (Mk 10:35-45), for example, we have James and John, the sons of Zebedee, asking Jesus for special places of power in paradise, in reward for the work they’re doing as members of his team.

“Grant that in your glory we may sit one at your right and the other at your left,” they beg.

Like the rich man in last week’s gospel who asked Jesus for a guaranteed ticket to heaven for doing what’s expected of him, these two don’t realize the responsibility that comes with the glory they seek. They also forget why Jesus chose them in the first place.

Jesus tells them: “You do not know what you are asking. Can you drink the cup that I drink or be baptized with the baptism with which I am baptized?”

Later in the reading, Jesus reveals the secrets to achieving glory that eluded James, John, the rich man and even the power-mad scientists of those old movies:

Ironically, rather than discouraging people from thinking of themselves as God, Jesus is encouraging it. But he wants them to get rid of their foolish notions of glory and get used to the concept of a “servant master.” In his reference to drinking of the sacrificial cup from which he will drink, he’s asking for the same level of empathy that instigated his earthly mission to take on flesh and the suffering that comes with it. He seems to be telling these ambitious brothers: “Put yourself in my place and then remember what I’m about to do for you, because the same service to your brothers and sisters will be required from you!”

Isaiah invited the faithful to such empathy for God the Son centuries before Jesus’ arrival with these words from our first reading (Is 53:10-11):

“Because of his affliction he shall see the light in fullness of days; through his suffering, my servant shall justify many, and their guilt he shall bear.”

The call to empathy for God and sympathy for his creatures is also loud and clear in our second reading from Hebrews (Heb 4:14-16):

“For we do not have a high priest who is unable to sympathize with our weaknesses, but one who has similarly been tested in every way, yet without sin. So let us confidently approach the throne of grace to receive mercy and to find grace for timely help.”

Frankenstein is the parable of a human creator who suffered for his own deadly sins and those of his creature because he sought the glory of God without accepting that role’s responsibilities. No redemption came from that suffering. The truth of Jesus is that in suffering for our sins he showed us that synergy with God requires sympathy for, and service to, all in his creation. Only through such empathy for God’s love for us can we enjoy the blessings of sharing that love with each other, thus sharing in his power and glory.