Visiting my parents’ grave on Christmas Eve, I realized something about the gravestone inscription that hadn’t hit me until then. When my father chose the epitaphs for my mother and himself, he didn’t use occupations or accomplishments to help visitors understand whose bodies were buried beneath the stone. He selected the titles most important to both of them: Mother and Father. 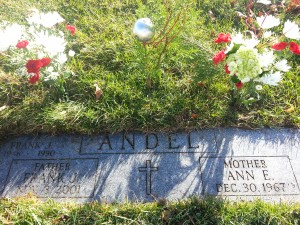 They were dedicated parents. Dedication, as applied to a person, is defined as having complete devotion to something. When applied to a thing like a building, it means that edifice stands for something its creators believed in. Thanks to my parents’ dedication, their desire for my brothers and me was for us to be living monuments to their memory. They wanted us to represent a holy family.

The Holy Family of Jesus provides THE model of such dedication. Jesus, Mary and Joseph dedicated themselves and each other to the salvation of the world. This Sunday’s readings for the Feast of the Holy Family offer several examples of dedication, framed by the eras in which those families lived. Today, if a father or mother were to dedicate a child, or be dedicated to each other to the extents described in this selection of readings, they might be considered politically incorrect at the least or abusive parents at worst.

The worst might be thought of a mother who dedicates her child for the rest of that child’s life as a sacrifice to God at a temple. Today such a woman might be arrested for abandonment, but in our first (alternate) reading (from Samuel, 1 Sm 1:20-22, 24-28), we meet Hannah, a formerly infertile woman, who prays to conceive a child. She eventually bears a son and, in gratitude, offers that son up through a nazirite dedication—a vow of sacrifice to God.

“I prayed for this child, and the LORD granted my request. Now I, in turn, give him to the LORD,” she tells Eli, the priest of the temple. “As long as he lives, he shall be dedicated to the LORD.” Hannah left Samuel there.

Our second reading, from Paul’s letter to the Colossians (Col 3:12-21), offers an example of dedication that today would be considered the height of political incorrectness—so much so that the following section is offered as bracketed text [you don’t have to read it!]:

“Wives, be subordinate to your husbands, as is proper in the Lord. Husbands, love your wives, and avoid any bitterness toward them. Children, obey your parents in everything, for this is pleasing to the Lord. Fathers, do not provoke your children, so they may not become discouraged.”

How “Leave it to Beaver” can you get? But from such families throughout history came great individuals, dedicated to doing great things in tribute to their roots. Jesus came from such a family, and starting at an early age, dedicated himself to bettering and saving humanity. Yet, taken out of context, today’s gospel reading (Lk 2:41-52) where Jesus the child runs away from his parents to spend a few days with a group of old men might reflect poorly on the oversight of his parents or on the obedience of the boy.

“After three days they found him in the temple, sitting in the midst of the teachers, listening to them and asking them questions, and all who heard him were astounded at his understanding and his answers. When his parents saw him, they were astonished, and his mother said to him, “Son, why have you done this to us? Your father and I have been looking for you with great anxiety.” And he said to them, “Why were you looking for me? Did you not know that I must be in my Father’s house?”

This “Smart Mouthed” kid dedicated himself body and soul to us in honor of his heavenly Father so we can have the right to live in his Father’s house as part of his extended Holy Family. Let’s dedicate ourselves to preparing for moving day.