Judas wasn’t the only disciple of Christ to kill himself after his master’s death sentence, but he was the only one who didn’t live to testify about it. As Easter Sunday’s readings open, a newly minted version of Peter takes a self-made witness stand. The last time he was grilled about his relationship with Jesus he refused to incriminate himself. This new testimony from the Acts of the Apostles (Acts 10:34a, 37-43) is given under an immunity won by his Master’s death—and this witness will not be silenced. 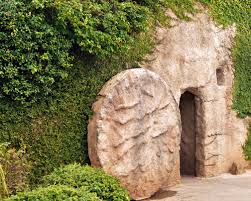 This man God raised on the third day and granted that he be visible, not to all the people, but to us, the witnesses chosen by God in advance, who ate and drank with him after he rose from the dead.

We are later taken back to the site where Peter finally shed his formerly scared-stiff self and accepted the life Jesus intended for him (Jn 20:1-9). The grave from which the Master rose turned out to be a burial site for the old cowering Peter. This is the site to which the old Peter raced, although outrun by the younger disciple. Yet the younger one reserves first-entry rights for the one the master chose as the rock upon which he would build his church.

When Simon Peter arrived after him, he went into the tomb and saw the burial cloths there, and the cloth that had covered his head, not with the burial cloths but rolled up in a separate place. Then the other disciple also went in, the one who had arrived at the tomb first, and he saw and believed.

From this grave a new Peter emerges, taking on a new job as a professional witness. Peter’s testimony continues:

He commissioned us to preach to the people and testify that he is the one appointed by God as judge of the living and the dead.

Another dead and risen disciple, Paul, adds his testimony to Peter’s via our second Easter reading (Col 3:1-4). Paul’s words help us realize that through his and Peter’s rebirth we are invited to kill and bury our old imperfection-riddled selves as well.

Brothers and sisters: … Think of what is above, not of what is on earth. For you have died, and your life is hidden with Christ in God. When Christ your life appears, then you too will appear with him in glory.”

Human beings have strong life lines to ephemeral things. We are called to sever these temporary ties before nature or fate do and rise with Peter, Paul and generations of other disciples who followed Christ out of that hollow but holy tomb.