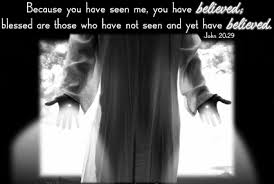 Poor Thomas. Thanks to this Sunday’s gospel reading (Jn 20:19-31) he became the poster boy for flagging faith. To this day “Doubting Thomas” is the generic label for anyone demonstrating a negative attitude toward someone else’s good news. For someone like me who share’s Thomas’ name and occasional blindness to miracles, I can’t help but feel a bit of his embarrassment as we read about Jesus dressing him down for this remark:

“Unless I see the mark of the nails in his hands and put my finger into the nailmarks and put my hand into his side, I will not believe.”

St. Peter’s historic reputation could have suffered a similar fate to Thomas’ after his denial of Jesus, but as we see in our first reading (Acts 5:12-16), Peter’s reputation changed for the better after Christ’s resurrection.

Yet more than ever, believers in the Lord, great numbers of men and women, were added to them. Thus they even carried the sick out into the streets and laid them on cots and mats so that when Peter came by, at least his shadow might fall on one or another of them.

Despite bad starts, both Peter and Thomas—and the remaining apostles—continued the work of the Holy Spirit after Christ bequeathed that mission to them. Nevertheless, “Doubting Thomas” still survives as a nickname because we all like the certainty of seeing nail prints. People like Peter and Thomas—and John—survive through the ages by BECOMING the nail prints for succeeding generations to see and believe.

Some disciples live the gospel and others write it down in one form or another. John did both. As author of the Book of Revelation, from which we get Sunday’s second reading (Rev 1:9-11a, 12-13, 17-19) he shared with us the voice of Christ as he heard it when he received his mission:

Once I was dead, but now I am alive forever and ever. I hold the keys to death and the netherworld. Write down, therefore, what you have seen, and what is happening, and what will happen afterwards.”

Fervent belief in what John wrote and in how all of Christ’s disciples live has a cost. Today in certain parts of the world new Christians risk their own lives and those of their loved ones for believing without seeing—just as those early Christians did while waiting for Peter’s shadow to fall upon them. As we were celebrating Easter in churches all over the world last weekend, news broke that a Taliban suicide bomber killed dozens of Christians—many of them children—and injured hundreds in a small Pakistan city. This site is frequented by Christians on holidays, explaining why it was targeted. “It’s tragic for the Christian community, but for the nation too,” said the director of the National Commission for Justice and Peace, an organization that works for the human rights of minorities like Christians in Pakistan.

The fact Christians still live in Pakistan PROVES the Holy Spirit is alive and well all over the world. As more admirers of Christ act to defend their presence, THEY become the nail prints for people whose faith flags now and then—like Thomas and me.