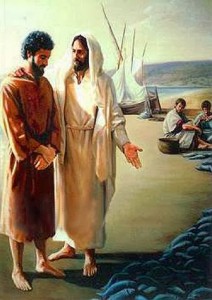 Our Lent and Easter liturgies give us access to many sensitive conversations between Jesus and his disciples. Any one of these can stand alone as the basis of a key lesson. This Sunday’s readings are interconnected. Both the first and second have direct ties to one pivotal conversation in Christianity’s history that made the rest of our faith’s history possible. This conversation between Peter and Jesus is detailed in today’s gospel reading, and combined with the other two readings, it gives us enough context to imagine Peter and Jesus’ thoughts as they ensured our faith’s future.

In our first reading (Acts 5:27-32, 40b-41) Peter is confronted by the high priest of the Sanhedrin who warns Peter and the other disciples to stop preaching in the name of that troublemaker they just killed. This is a different Peter from the one who denied even knowing Jesus. Not only does he own up to knowing the Lord, but he vows to keep testifying to that knowledge.

“We must obey God rather than men,” Peter says. “The God of our ancestors raised Jesus, though you had him killed by hanging him on a tree. God exalted him at his right hand as leader and savior to grant Israel repentance and forgiveness of sins. We are witnesses of these things, as is the Holy Spirit whom God has given to those who obey him.”

Before saying all that, we can imagine Peter thinking back to the last conversation he had with Jesus, as related in John’s gospel (Jn 21:1-19). This is where Jesus asks Peter three times, “Simon, son of John, do you love me?” This forces Peter to avow his love for Jesus three times—as many times as he had recently disavowed knowing him. We can also imagine Peter contemplating for the rest of his life the following sentence Jesus laid on him after Peter completed his penance: “Amen, amen, I say to you, when you were younger, you used to dress yourself and go where you wanted; but when you grow old, you will stretch out your hands, and someone else will dress you and lead you where you do not want to go.”

As John explains in this gospel passage, “He said this signifying by what kind of death [Peter] would glorify God.” Although Peter and his fellow disciples walked away from this encounter with the Sanhedrin with a warning, he knew their earthly fate was sealed, and there would be many more such encounters before meeting that fate. But what happened between those encounters would form the basis of a movement that would last until the end of time—and beyond, to the revelation of the kingdom they all preached as taught to them by their master.

Going back to that conversation we just imagined Peter playing back in his head, we can also imagine Jesus, during that same conversation—as he tells Peter to “feed my lambs, tend my sheep, and feed my sheep”—that unbound by space and time he might be flashing forward to the vision of his kingdom that he would reveal to John, as related in our second reading (Rev 5:11-14). In this vision those sheep would be flocking around their shepherd—who happened to also be the Lamb of God:

Then I heard every creature in heaven and on earth and under the earth and in the sea, everything in the universe, cry out: “To the one who sits on the throne and to the Lamb be blessing and honor, glory and might, forever and ever.”

That’s our future—linked to an eternity rooted in one timeless moment shared between a shepherd and a fisherman.