If you were like me in high school, any subject that ended in “ometry” made your eyes crust over. If I couldn’t see any practical application of its complexity to my simple life, I reasoned, why expend my few and precious brain cells to decipher it? To other people, though, that same complexity has an intrinsic beauty. For them it transfigures math from science into high art.

Religion affects many the same way. Detractors may not see its application to their lives, but others see beauty in its complexity. A High Mass said and sung in Latin can produce tears of joy. The intermingling of spicy incense, sweet artistic imagery, meaty scriptures and the rich musical heritage accompanying the Eucharist invites the participation of one’s spirit.

It’s hard to imagine this 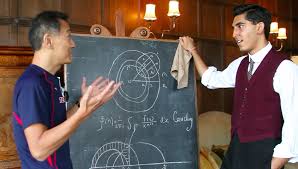 formulation without the faith factor, but a new movie comes close. It’s “The Man Who Knew Infinity,” a biography of Srinivasa Ramanujan, an Indian mathematician who lived from 1887 to 1920. Mathematics did as much for his faith as a high mass does for a devout old-school Catholic’s. For Ramanujan, something about complex formulae went beyond the proofs that scholars required of him so they could judge his truths.  These mathematical expressions were the poetry he saw in the granularity of desert sands as they either flowed smoothly to form a dune or blew corrosively to etch a rock. Theological scholars searching for deeper meaning in these contrasts might slap on the label “intelligent design,” but for Ramanujan the math behind it was the very language of the Divine.

“An equation means nothing to me unless it expresses a thought of God,” he once said.

Ramanujan was Hindu, not Catholic, but what Catholics might call the Holy Spirit, he attributed to an intelligence he said would “write equations on his tongue.” Complex formulas would pour out of him, but when the scholars at the University of Cambridge asked him to prove his work, he struggled. It was as if these formulae were expressions of his faith and he felt proofs were unnecessary—and frustrating.

So when looking at this Sunday’s mass readings I couldn’t help but imagine how Jesus might have felt when the people who witnessed him restoring life to the dead continued seeking proof of his divine identity. The effects of humanity’s dull faith quotient are evident in all three readings. In each one, the Holy Spirit brings someone back to life. Let’s take them quickly:

In the first reading from the Book of Kings (1 Kgs 17:17-24), Elijah brings the son of a widow back to life. Before he calls upon God to perform this miracle, this widow just about blames Elijah for the boy’s death. Upon returning the boy to her alive, she says “Now indeed I know that you are a man of God. The word of the LORD comes truly from your mouth.”

In the Gospel reading (Lk 7:11-17) something similar happens: Jesus restores life to the son of a widow, but this time, in front of many witnesses. According to St. Luke’s account, “Fear seized them all, and they glorified God, crying out “A great prophet has arisen in our midst, “and “God has visited his people.” This report about him spread through the whole of Judea and in all the surrounding region.

And yet, even with such proof, he was crucified.

Finally, in the second reading taken from a letter St. Paul wrote to the Galatians (Gal 1:11-14a, 15ac, 16a, 17, 19 ), Paul tells of his own miraculous rising from the dead shell of a person he was. Paul attributes the miracle of his rebirth to Jesus, and he seems as astounded by his own rising as the people who witnessed Jesus raise the dead firsthand.

You heard of my former way of life in Judaism, how I persecuted the Church of God beyond measure and tried to destroy it, and progressed in Judaism beyond many of my contemporaries among my race. But when God, who from my mother’s womb had set me apart was pleased to reveal his Son to me, so that I might proclaim him to the Gentiles, I went into Arabia and then returned to Damascus.

The conversion of Saul into Paul might be the most dramatic proof to the solution for the problem of faithlessness in today’s world. St. Paul’s letters still speak for the Master in the 21st century and continue to instill the Holy Spirit in the faithful who read them—making the third element of the Holy Trinity eternally tangible and relevant. You and I factor into the Holy Spirit’s solution, making it a living presence in this world and proving that one can go into three billions of times.