It takes faith to be afraid of God. That’s why the following headline in a recent edition of The Wall Street Journal’s Op-Ed section was such an attention grabber: 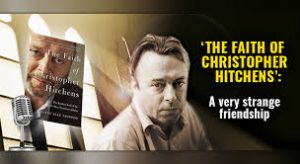 Are Atheists Afraid of God?

This was a commentary about a new book telling of the last days of well-known atheist and author Christopher Hitchens. The Faith of Christopher Hitchens details some of the conversations author Larry Alex Taunton had with Hitchens during a couple of car trips they took together. Hitchens, who was dying of cancer at that time, read out loud with Taunton the gospel of John as they traveled.

Although the author makes no claims of a deathbed conversion, it’s interesting the two chose John’s, of the four gospels. Perhaps Hitchens, at this vulnerable time in his life journey, could identify with some of the women John spotlighted in his gospel, like:

The Samaritan woman at the well whose thirst for a longer and better life Jesus understood better than she did, as he told her:

Even more affecting for Hitchens might have been the “harlot” who was about to be stoned by a judgmental crowd clinging to the letter of the law at the cost of its heart (“Moses commanded us to stone such women. So what do you say, Jesus?”)

“Let the one among you who is without sin be the first to throw a stone at her,” Jesus replied.

Hitchens and his atheist colleagues put their faith in this world’s natural laws and in doing so, reduce themselves to its slaves. The Bible documents such foolishness repeatedly, showing that even the strongest in faith fall into the snares of the flesh, as this Sunday’s first reading (2 Sm 12:7-10, 13) about King David’s fall from God’s grace tells us.

Nathan said to David: “Thus says the LORD God of Israel: ‘I anointed you king of Israel. I rescued you from the hand of Saul. … Why have you rejected the LORD and done evil in his sight? You have cut down Uriah the Hittite with the sword; you took his wife as your own. … Then David said to Nathan, “I have sinned against the LORD.” Nathan answered David: “The LORD on his part has forgiven your sin: you shall not die.”

David was enjoying his earthly prerogatives as King, using his absolute power to do things for which a commoner and a woman would be stoned under the law of Moses. But as St. Paul tells the Galatians in our second reading (Gal 2:16, 19-21), no one can be justified by the laws of men.

By works of the law no one will be justified. For through the law I died to the law that I might live for God. I have been crucified with Christ; yet I live, no longer I, but Christ lives in me … for if justification comes through the law, then Christ died for nothing.

Did Hitchens die for nothing? Of course that’s not for us to say. He was like you and me in one very important way. He was a sinner. But maybe through his study of John’s gospel he developed a love for the women represented there—sinners whom Jesus loved and granted a new doorway to eternal life. Those women had a soul sister in Sunday’s gospel reading from Luke (Lk 7:36—8:3) which tells of the woman who, in sorrow for her sinful life and with faith in the power of Jesus to save her from it, washes his feet with her tears—a scene witnessed by the Pharisees—devoted students of man’s laws.

“If this man were a prophet, he would know who and what sort of woman this is who is touching him, that she is a sinner,” they said. But Jesus, knowing their self-righteous thoughts and judgments, gave them a preview of God’s judgment, addressing the following to Simon, whose house was the setting for this mild rebuke from Jesus:

“When I entered your house, you did not give me water for my feet, but she has bathed them with her tears and wiped them with her hair. You did not give me a kiss, but she has not ceased kissing my feet since the time I entered. You did not anoint my head with oil, but she anointed my feet with ointment. So I tell you, her many sins have been forgiven because she has shown great love. But the one to whom little is forgiven, loves little.”

Hitchens’ atheist colleagues, like the Pharisees, use the laws of man and nature to cast stones at faith-based beliefs. You can see some of these attacks online, aimed at Taunton and the account of his road trip with their hero, Hitchens. As for Hitchens himself, he now has the answer to his lifelong questions about God’s existence. That answer obviously started before he died, when he took that road trip with his friends Taunton and St. John. Through that journey it may be that Hitchens got closer to faith than he ever anticipated—and that he left behind him any fear of what and who is waiting for him at the next stop.