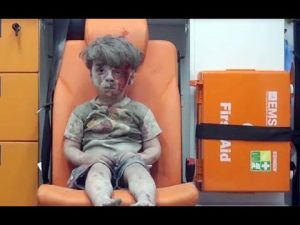 The viral image of an injured Syrian boy, orphaned by war and sitting alone in an ambulance while still covered with the debris of destruction, haunts every soul who sees it. He should be crying, but he just stares. Is he silent because he’s in shock or because he has come to realize that cries no longer get attention in Aleppo?

Human folly has altered this boy’s opportunity to plan and dream. The forces of nature have done the same for the citizens of several small towns in Central Italy that were devastated by an earthquake not long after that boy’s image was tweeted and published internationally. That quake destroyed their towns and their plans. Meanwhile, back in the U.S., flooding had the same effect on thousands of citizens in Louisiana a few weeks ago.

Both orphans of war and victims of natural disaster offer living testimonials to the impotence of human planning. Today the futures of all these victims depend on the hearts of neighbors choosing to take on the spirit of adoption—the role of God on earth. It is that role Christ calls us to assume as part of his plan in this Sunday’s gospel reading from Luke (Lk 14:25-33), although a cursory read makes him sound like a cheerleader for abandonment.

“If anyone comes to me without hating his father and mother, wife and children, brothers and sisters, and even his own life, he cannot be my disciple,” Jesus says. But rather than being a call to destroy their families, his is a challenge to grow them and lead them to a home beyond the bounds of this fragile earth. Still, Jesus knew this would take planning skills beyond the scope of most of his followers.

“Which of you wishing to construct a tower does not first sit down and calculate the cost to see if there is enough for its completion?” he asks. “Otherwise, after laying the foundation and finding himself unable to finish the work the onlookers should laugh at him and say, ‘This one began to build but did not have the resources to finish.’”

The kind of planning Jesus had in mind is similar to what he was able to envision during his 40 days in the desert before assuming his earthly ministry. Satan also planned. He came up with several cunning temptations to foil Christ’s plan for humanity’s salvation. The destroyer’s plan was no match for the Savior’s. It underestimated Christ’s otherworldly vision because it was confined to aiming the temptations of this world at someone who was far above them. Our first reading from the Book of Wisdom (Wis 9:13-18b) explains why Satan’s unwise strategy failed so miserably.

Scarce do we guess the things on earth, and what is within our grasp we find with difficulty; but when things are in heaven, who can search them out? Or who ever knew your counsel, except you had given wisdom and sent your holy spirit from on high? And thus were the paths of those on earth made straight.

Key to Christ’s plan was this spirit and his staffing. He selected and inspired 12 of the unlikeliest candidates to help spread his plan around the world. This band of apostles then infused their own disciples with the spirit of adoption so they would care for each other as they kept the gospel alive century after century. Paul gives us a glimpse of his succession planning via his letter to Philemon (Phmn 9-10, 12-17), in which he makes the case for adoption over slavery in his sponsorship of Onesimus.

Perhaps this is why he was away from you for a while, that you might have him back forever, no longer as a slave but more than a slave, a brother, beloved especially to me, but even more so to you, as a man and in the Lord. So if you regard me as a partner, welcome him as you would me.

Christ’s plan for us is still unfolding, and its payoff will be revealed when we least expect it. Meanwhile, life goes on, foiling our best laid plans and challenging us to adapt by adopting a kind of family planning that will see us through everything this world can throw at us, including earthquakes, floods and the evils of war.