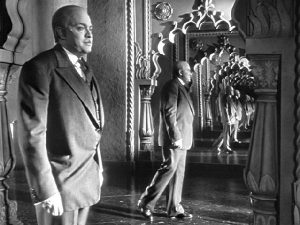 For Baby Boomers turning 60 like me, a mirror can be their worst enemy. When we look into one, some of us see oblivion. A couple new books reviewed in last weekend’s Wall Street Journal were written by authors hitting that landmark. They offer variations on that theme, but oblivion is their common denominator. “We come into the world alone, with a cry,” writes one of them. “We exit alone, to confront the final eternal silence.”

We Boomers can be so dramatic.

Both authors talk about all the things they want to do before they reach the dead end reflected back from their mirrors. The Israelites of Moses’ time saw a similar reflection staring back at them from the shiny golden idol they made to help them escape oblivion. They seemed to have lost faith in the God of Moses. It’s that God who took notice of how this reflected on them, as we see in this Sunday’s first reading from the Book of Exodus (Ex 32:7-11, 13-14).

“… they have become depraved. They have soon turned aside from the way I pointed out to them, making for themselves a molten calf and worshiping it, sacrificing to it and crying out, ‘This is your God, O Israel, who brought you out of the land of Egypt!’ I see how stiff-necked this people is,” continued the LORD to Moses.

Those two Boomer authors have a lot in common with these backsliding Israelites. They’ve made idols of their own images. The lesson we should take from both sets of writings is that instead of desperately trying to find ourselves in our own mirrors, we should find our reflections in the mirrors of others. That’s what Jesus helps us accomplish through his parables: he holds up a mirror and make us see who we truly are via the images of various aspects of ourselves reflected in them.

The three parables in Sunday’s gospel reading from Luke (Lk 15:1-32) reflect us to a tee. We all tend to get lost in ourselves and these parables are about how to be found. Jesus tells us we are sheep who tend to wander off, but when he finds us, our shepherd rejoices. “There will be more joy in heaven over one sinner who repents than over ninety-nine righteous people who have no need of repentance,” Jesus tells the self-righteous Pharisees who objected to the company he kept.

We in this modern age are also the lost coin whose owner celebrates its return. But maybe more fittingly, we are the Prodigal Son. Like some of us Boomers, the spoiled brat of this parable gets antsy when he doesn’t like what his own reflection shows as it gleams back from the golden idol he created in his mind. After squandering the early inheritance he demanded from his father, this lost boy comes back home a humbled man. Looking into his father’s face, for the first time he is able to see his true self reflected back. He also sees what his father went through during his boy’s debauchery and he learns how to adjust his own self-image to correct the counterfeit values reflected by the golden idol he created as that boy.

Jesus was a master of parables, and that was evident even in the people he chose to carry on with his earthly mission. His disciples were living parables with whom we can relate and in whom we can see ourselves. Paul owned up to this role in explaining Christ’s selection criteria (1 Tm 1:12-17).

Christ Jesus came into the world to save sinners. Of these I am the foremost. But for that reason I was mercifully treated, so that in me, as the foremost, Christ Jesus might display all his patience as an example for those who would come to believe in him for everlasting life.

St. Paul held up a mirror into which we can gaze. If we take on that same role for others we can avoid the Modern Boomer’s vision of oblivion and offer each other a mirror-to-mirror view of the infinite kingdom that is our inheritance.