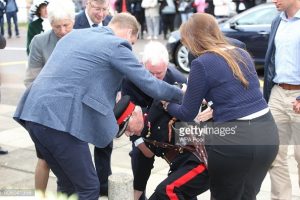 Between stories on American politics and international terrorism last week, Prince William, the Duke of Cambridge, made world news by lifting someone up off his behind. It happened in Harlow, Essex, England where, during a meet-and-greet at Stewards Academy in Harlow, Jonathan Douglas-Hughes, the 72-year-old vice lord-lieutenant of Essex, slipped and fell while standing behind the prince. How sad that this account of a royal stooping to help a lower ranking official get up off the ground was considered surprising enough to be newsworthy. When class and rank overshadow our conduct as children of God, we have a serious moral crisis similar to the one suffered by the leaders cited by the Book of Amos from which we take this Sunday’s first reading (Am 6:1a, 4-7 ).

Woe to those who are complacent in Zion, secure on the mount of Samaria, Leaders of the first among nations, to whom the people of Israel turn. … Lying upon beds of ivory, stretched comfortably on their couches, they eat lambs taken from the flock, and calves from the stall! Improvising to the music of the harp, like David, they devise their own accompaniment. They drink wine from bowls and anoint themselves with the best oils; yet they are not made ill by the collapse of Joseph!”

Yet there is good gospel news that didn’t make it into that report on Prince William. As an officer in the RAF and a military man, William has learned to maintain the heart of a soldier who must live in the here and now to help fellow soldiers survive. Such people don’t have the luxury of brooding about their past and future—until they retire from the battlefield. Doing the right thing when side-by-side with their brothers and sisters is not always something they can plan. Just as in civilian life, those opportunities often come at a moment’s notice, in God’s time zone: The Now.

The Now is a Godly state of mind, as St Paul and his colleagues write in several letters. In this Sunday’s to Timothy (1 Tm 6:11-16), we are reminded of our duty to the leader who lowered himself to take our place in the battle for our soul.

I charge you before God, who gives life to all things, and before Christ Jesus, who gave testimony under Pontius Pilate for the noble confession, to keep the commandment without stain or reproach until the appearance of our Lord Jesus Christ.

Paul’s letters are rich with reminders of our spiritual programming. He told the Thessalonians that they don’t need him to remind them to love one another. This trait is God-taught. He also reminded the Corinthians that to each is given the “manifestation of the spirit for some benefit.”

Unfortunately, we in the here and now of the 21st century tend to think of the rich man’s behavior in this Sunday’s gospel reading from Luke (Lk 16:19-31) as the standard for the upper classes throughout history—otherwise, Prince William’s simple act of kindness wouldn’t have gone viral across the news wires. In Jesus’ parable, a rich man dies and goes to hell for his ignorance of poor Lazarus’ plight as he lay right outside this man’s door. As much as the rich man begs Abraham for salvation from his past sins of omission, it’s too late.

“Then I beg you, father,” the rich man says, “send [Lazarus] to my father’s house, for I have five brothers, so that he may warn them, lest they too come to this place of torment.’ But Abraham replied, ‘They have Moses and the prophets. Let them listen to them. … If they will not listen to Moses and the prophets, neither will they be persuaded if someone should rise from the dead.’”

Whether using the voices of Moses, the prophets, or Jesus himself, the spirit of God is always informing our conscience in the here and now. Living in the now means purging the purgatory of contemplating what was and what might be. All we have to do is remember God’s name. It’s not “I Was,” or “I Will Be,” it’s “I AM!”

If we lose touch with that spirit establishing our code of conduct, we condemn ourselves to exist forever in the hell of contemplating what we might have done.