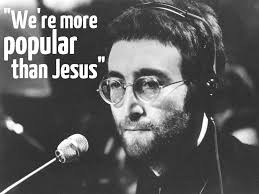 A new documentary about the Beatles reminds us how crazily their fans pursued them. This urge to chase them was almost instinctual, like how some dogs can’t resist chasing cars. The problem for both is, not knowing what to do if you catch what you chase. The same applies for any fanatic going after their fantasy: what do you do once your dream is realized?

That seems to be the situation in which we find Zacchaeus in this Sunday’s gospel reading (Lk 19:1-10). He acts like a Beatlemanic as he tries to get a better in-person look at Jesus as the Master passes through Jericho. Not many grown adults would shinny up a sycamore tree to see someone who’s famous. Lucky for Zacchaeus, Jesus turned out to be just as determined to catch up with him. The difference is, Jesus knew exactly what he wanted from his quarry once he caught up with them. His disciples had no choice but to spread his word, as we know because of the work accomplished over the centuries by those servants.

Unlike the members of the Beatles, Jesus knew his followers individually and knew their value for getting his word out. And unlike Beatlemaniacs whose mad screams drowned out the music that made the Beatles so important to pop culture, Jesus was determined that his followers of every age hear exactly what he said so that his words would spread around the world for centuries. His hand-picked disciples lent their distinct gifts to accomplishing that mission.

As more and more followers take on that mission over succeeding years, the attitude of those missionaries sometimes makes their missions more challenging. Like rabid fans, we devout disciples can develop a sense of entitlement rather than accepting the unworthiness which is our lot. Yes, we’re on our Creator’s mind, but by His grace, not by climbing trees or anything else we try to do to get His attention. Sunday’s first reading from the Book of Wisdom (Wis 11:22-12:2) illustrates our relationship with the One who fashioned us:

Before the LORD the whole universe is as a grain from a balance or a drop of morning dew come down upon the earth. But you have mercy on all, because you can do all things; and you overlook people’s sins that they may repent. For you love all things that are and loathe nothing that you have made;

Zacchaeus turned out to be more of a vessel for Jesus’ message than just a recipient—although he was that too. He was made for that purpose, as his presence in Luke’s gospel and our knowledge of his existence proves. Like the Roman soldier elsewhere in Luke who admitted to Jesus that he was not worthy that the Master enter his home to cure his servant, all Jesus had to do was say the word and that healing would happen. In the passage about Zacchaeus, going to this man’s home was Jesus’ idea—because doing so would heal Zacchaeus’ soul and teach the rest of us that our worthiness is God’s doing, not ours. St. Paul says as much in his letter to the Thessalonians (2 Thes 1:11-2:2), which is excerpted for Sunday’s second reading:

Brothers and sisters: We always pray for you, that our God may make you worthy of his calling and powerfully bring to fulfillment every good purpose and every effort of faith, that the name of our Lord Jesus may be glorified in you, and you in him, in accord with the grace of our God and Lord Jesus Christ.

John Lennon might have been right when he shook up our culture by saying that the Beatles were more popular than Jesus. Popularity has a shelf life. It’s as mortal as our very bodies. Indeed, the Beatles eventually disbanded, and John Lennon met his mortality. Meanwhile, Jesus Christ’s divinity will continue to convince generations of believers to find a home with him—just as Zacchaeus did.