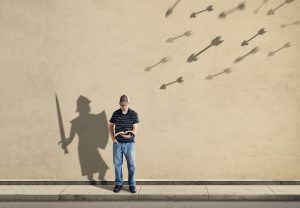 Some of the greatest biblical conflicts were between two groups of people: those who feared God and those who were scared of God. The latter group was scared that if there really was a resurrection then they would be held accountable for the things to which they were addicted on this earth, like power, wealth, carnality, jealousy, pride and the rest of our deadly sins.

This Sunday’s first reading, taken from the Book of Maccabees (2 Mc 7:1-2, 9-14), is the ugly but beautiful account of bravery in the face of cowardice. We are introduced to persecutors who are taken aback by the courage of a family of faithful people facing up to their torture.

It happened that seven brothers with their mother were arrested and tortured with whips and scourges by the king, to force them to eat pork in violation of God’s law. One of the brothers, speaking for the others, said: … “You accursed fiend, you are depriving us of this present life, but the King of the world will raise us up to live again forever. It is for his laws that we are dying.” … Even the king and his attendants marveled at the young man’s courage, because he regarded his sufferings as nothing.

What impresses these sadists even more than the family’s bravery is their respectful fear of a master not of this world. These are people supremely confident of our God’s existence and their destiny to find eternal sanctuary with Him.

Their persecutors are both impressed and shocked by what they hear coming out of each of them: prayers in place of screams.  These tyrants show no mercy in the face of such testimonies of faith, but they can’t help but be affected by them—and one would hope, in time, haunted by them.

This world’s current tyrants, ISIS most prominent among them, possess the same dark spirit that gives courage to cowards everywhere who try to take comfort from their earthly power over others. They believe in the resurrection alright, but it’s an exclusive club whose front door is controlled by them—not a spirit they fear might admit a soul judged more worthy than they. These are the same types St. Paul refers to in our second reading from his letter to the Thessalonians (2 Thes 2:16-3:5):

Finally, brothers and sisters, pray for us, so that the word of the Lord may speed forward and be glorified, as it did among you, and that we may be delivered from perverse and wicked people, for not all have faith.

These are also the same types whose idea of paradise is a man-made place run on man-made laws. In Jesus’ time these were the Sadducees, described in Sunday’s gospel reading (Lk 20:27-38) as those who deny that there is a resurrection. In Luke’s account they challenge Jesus to solve a riddle designed to trick him into acknowledging that the earthly aspects of marriage that bind us to man’s precepts apply beyond the bounds of earth.

Jesus said to them, “The children of this age marry and remarry; but those who are deemed worthy to attain to the coming age and to the resurrection of the dead neither marry nor are given in marriage. They can no longer die, for they are like angels; and they are the children of God because they are the ones who will rise.

Fear of God teaches us to never be scared of anything. Our Father bequeathed us that courage to intimidate tyrants of every age. Let’s pray that we’ll never have to use it.