Welcome to the end of the world. How does it feel after these few days into the post-election Armageddon many Chicken Littles expected? Probably the same as the week before Election Day. No matter who wins any elected office, the end of the world still lies ahead. However, its arrival will surprise us like a thief in the night—it won’t be triggered by anything we do. The only thing we can affect is our own preparation for it. As long as we do the right things, the rest is simple—although, not easy.

Some may take comfort from this Sunday’s mass readings, but many of us will realize we have a lot of work to do.  The first reading’s excerpt, from Malachi (Mal 3:19-20a ), is short and to the point:

Lo, the day is coming, blazing like an oven, when all the proud and all evildoers will be stubble … But for you who fear my name, there will arise the sun of justice with its healing rays.

Fear is plentiful these days, but we tend to either invest it unwisely or squander it to control others. The only things we should spend it on are: faith that God will keep His word, and prayer that we will be on the right side of it. The best gauge for that is how we treat others. As St Paul tells his disciples in our second reading to the Thessalonians (2 Thes 3:7-12 ), we may have heavenly intentions, but if they’re not backed up by exemplary lives, those intentions will be among the stubble we leave behind.

“We wanted to present ourselves as a model for you, so that you might imitate us,” Paul writes.  “In fact, when we were with you, we instructed you that if anyone was unwilling to work, neither should that one eat. We hear that some are conducting themselves among you in a disorderly way, by not keeping busy but minding the business of others. Such people we instruct and urge in the Lord Jesus Christ to work quietly and to eat their own food.” 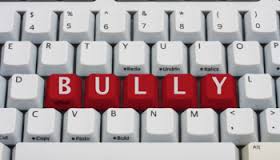 There are plenty of modern-day examples of people minding the business of others, especially via our social media. During this drawn-out election campaign, that “minding” even took the form of bipartisan bullying, belittling and warnings of dire consequences for not thinking like they do. Our personal computers have turned into bullying pulpits used by false prophets to misappropriate people’s fear. This Sunday’s gospel reading from Luke (Lk 21:5-19) recalls Jesus’ warning to his followers that they will experience similar behavior—especially from those in power who abuse their positions and try to channel fear their way.

“Before all this happens, however, they will seize and persecute you, they will hand you over to the synagogues and to prisons, and they will have you led before kings and governors because of my name. … You will even be handed over by parents, brothers, relatives, and friends, and they will put some of you to death. You will be hated by all because of my name, but not a hair on your head will be destroyed. By your perseverance you will secure your lives.”

Facebook and twitter are full of examples of inter- and intra-family conflict. This is a problem of people, not politics. We would do well to follow Paul’s advice and live exemplary lives offline—by breathing the gospels rather than spewing our own from behind an Oz-like façade.  Let’s be the change Jesus died and rose to bring about.