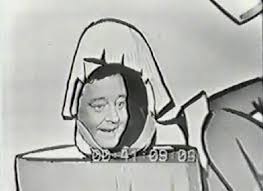 We’ve all had those days where life felt like a big cosmic game show. On those days when the world throws its toughest puzzles at you it can be hard just figuring out the rules or your role in the game’s universe.  There really was a TV game show based on a similar premise in the early 60s. It was called “You’re in the Picture” and it lasted just two episodes. The second episode consisted of the host (Jackie Gleason of Honeymooners fame, left) apologizing for the first one.

The concept of the show had promise. A group of four celebrities would stand behind an illustration of a famous scene involving several characters. These stars would stick their heads through the holes where their characters’ heads would be and then try to identify the famous situation in which they were playing a part. They were to do this without being able to see the big picture their heads decorated.  The only help they had was from Gleason himself, who as the omnipotent host would offer clues to help them figure out their meaning in this universe.

Critics said the show didn’t work because the home audience couldn’t relate to celebrities, and that it would have been more effective to involve normal people from the studio audience in these scenes instead. The Scriptures prove those critics had a good point.

Take the readings from this Sunday’s mass. They involve scenes with normal people like us who are thrust into situations they could never have pictured themselves in but nevertheless spent the rest of their lives asking God for help understanding their role. Our first reading from the second book of Samuel (2 Sm 5:1-3) features King David, the youngest son of Jesse, who went from being a mere boy shepherding his father’s sheep to fulfilling God’s role for him as king of Israel. This reading depicts that moment when the tribes of Israel clue David in on what he meant to them.

“Here we are, your bone and your flesh. In days past, when Saul was our king, it was you who led the Israelites out and brought them back. And the LORD said to you, ‘You shall shepherd my people Israel.”

Still, even in playing that role God chose for him, David made many mistakes—like all of us do. Mankind needed a better example to help us figure out how to overcome our sinful nature and fully inhabit the role God intended for each of us. That’s why God took on our form and showed us how it’s done. Those 40 days Jesus spent in the desert at the beginning of his public life helped him clarify his relationship to us as a human being and prepared him for the cross that would clarify his relationship to us as King of the Universe.

In our second reading (Col 1:12-20), St. Paul, who started his public life as a persecutor of Jesus’ followers only to be thrust into the big picture as their champion, clues the rest of us in on our place in Christ’s universe:

He is before all things, and in him all things hold together. He is the head of the body, the church. He is the beginning, the firstborn from the dead, that in all things he himself might be preeminent.

Our gospel reading (Lk 23:35-43) proves how generous God is with the time he allows us to figure out our place in his universe—up to the last minute of our earthly life. The scene is Calvary, where we see three crosses. The one in the middle is the one from which God Himself demonstrates what we’re playing for. We are invited to take our place on the cross at its side and see its inhabitant for who he is. Our role is cut out for us: we are a sinner whose life led to this place but whose last-minute epiphany of understanding would win him the journey of his lifetime:

“Jesus, remember me when you come into your kingdom.” Jesus replied, “Amen, I say to you, today you will be with me in Paradise.”

That’s a prize worth sticking your neck out for.