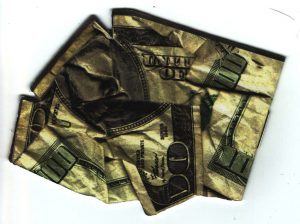 Would you take the time to stoop and rescue a crumpled, filthy piece of paper from the sidewalk on your journey to an important appointment? You probably would if you recognized Ben Franklin’s face peering through the dirt. That little parable of the soiled C-note was dramatized by Bishop Roger Gries as he began his homily at last week’s Journey to Bethlehem mass, an annual event held at Tremont’s OLA/St. Joseph Center and sponsored by Catholic Charities Disability Services and Ministries. This was a fitting demonstration for a congregation filled with people poor in spirit but rich in faith about the 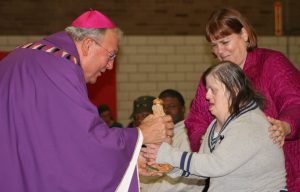 redemption of their hidden value.

Many of them relate to the rejection that the Holy Family faced as they journeyed to Bethlehem. The innkeepers from whom Joseph sought shelter for his pregnant wife didn’t see the value this budding family would bring to humanity thousands of years into the future. The readings for the third Sunday of Advent echo that theme of the intrinsic spiritual value God sees in us. They can help all of us find strength in the promise of Christ’s coming as foretold by Isaiah in our first reading ( Is 35:1-6a, 10) .

Strengthen the hands that are feeble, make firm the knees that are weak, say to those whose hearts are frightened: Be strong, fear not! Here is your God, he comes with vindication; with divine recompense he comes to save you. 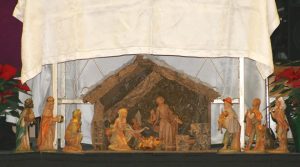 All of the human frailties Isaiah detailed were evident as one walked among last week’s Journey to Bethlehem congregation. Yet as the service proceeded, collective hope was also evident. One by one, these faithful people brought to the altar statues representing the Holy Family and the shepherds and animals that kept them company on that first Christmas night. Backing them up in their procession toward the stable, as in our life’s journey, were the bread and wine that would deliver the promise of Christ’s body and blood.

Waiting for the fulfillment Advent represents takes patience and discipline. All of us who are broken seek the sudden wholeness that Jesus brought many through his miracles. But as James tells us in this Sunday’s second reading (Jas 5:7-10) , the development of good fruit requires a farmer’s patience.

See how the farmer waits for the precious fruit of the earth, being patient with it until it receives the early and the late rains. You too must be patient. Make your hearts firm, because the coming of the Lord is at hand.

Easier said than done. John the Baptist himself was still not sure—even after baptizing his cousin in the water—that this was the one whose sandals he was unfit to unfasten (Mt 11:2-11). That’s why the poor in spirit who regained the riches of sight, hearing, mobility, health and life after gathering the guts to seek these gifts from Jesus had such a special placement on his list of beatitudes: because “theirs is the Kingdom of Heaven.” 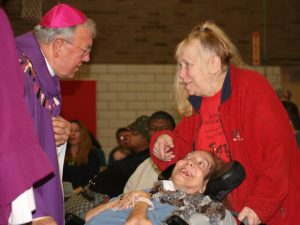 Amen, I say to you,” Jesus said, “among those born of women there has been none greater than John the Baptist; yet the least in the kingdom of heaven is greater than he.”

The humble hearts who came to last Saturday’s Journey to Bethlehem were no less faithful about who Jesus was than those who made their own personal journeys to seek him out 2000 years ago, whether in the streets of Jerusalem or from a cross next to him at Golgotha.  And Jesus is just as sure about the purchasing power of those poor in spirit. By their faith they’ve laid claim to his Kingdom.