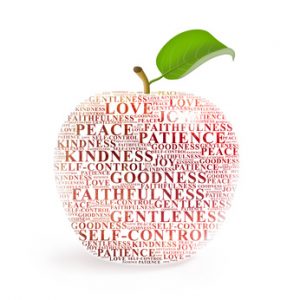 Apple representing the fruit of the Holy Spirit.

Whether or not you believe in the literal account of Adam and Eve and the nature of their original sin, what’s harder to believe is that their Creator would abandon them and their descendants to hopeless lifetimes of toil and pain. He created humanity in his image, after all, so you would think He would want His spiritual children to share in his wisdom concerning good and evil—especially since they were so vulnerable to the latter.

According to the Genesis account, it was the serpent who twisted humanity’s desire for that knowledge into greed for power and selfishness. He did that by making Eve believe God was jealously guarding the secrets of good and evil from them—lest they become his equals.

What’s easier for 21st century believers to absorb is that we really are called to be like God. God is love, and love is fueled by empathy for others. What better way for such a God to teach his creatures a lesson about what it is to be like Him than to participate in some role reversal? Hence, God became man so that man could better learn to be like God. Through the teachings of Jesus Christ (the new Adam), humanity is called to discard the selfish motives Eve’s tempter promoted and adopt the unconditional love from which and for which we were created.

This Sunday’s mass readings call us to believe in that version of God, and to avoid being our all-too-human ideal who jealously clings to power—and whose belief in self-justification Adam and Eve exemplify. That belief system is the curse of our own fallen nature. An Old Testament reading from Leviticus (Lv 19:1-2, 17-18) presages a key teaching from Jesus, and it comes from God the Father via Moses:

The LORD said to Moses, “Speak to the whole Israelite community and tell them: ‘Be holy, for I, the LORD, your God, am holy.’”

In our second reading, Paul reminds the Corinthians of a similar teaching from Jesus (1 Cor 3:16-23):

Our society’s culture of death and the belief that we own rather than lease the vehicles which our souls drive presents the church with many moral dilemmas about the nature of life. But it is Jesus himself—God incarnate—who picks the juiciest, biggest piece of spiritual fruit off of Eden’s tree of knowledge and serves it up to us on a silver platter via Matthew’s gospel (Mt 5:38-48) so that we may become more like him in our dealings with each other:

If you love those who love you, what recompense will you have? Do not the tax collectors do the same? And if you greet your brothers only, what is unusual about that? Do not the pagans do the same? So be perfect, just as your heavenly Father is perfect.”

For 2,000 years humanity has been trying to sink its teeth into the fresh fruit offered by the new Adam, but Eve’s old tempter keeps diverting us toward a poisoned orchard where enmity and self-justification thrive. If we can harvest the new Eden’s spiritual fruit, the feast of a lifetime awaits.