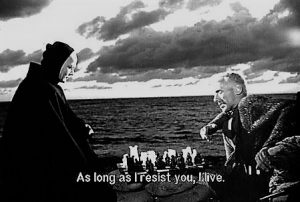 For if, by the transgression of the one, death came to reign through that one, how much more will those who receive the abundance of grace and of the gift of justification come to reign in life through the one Jesus Christ.

Through his letter to the Romans, Paul gives us all permission to think of Jesus as the new Adam. So let’s put Sunday’s gospel reading in a new perspective too. The new Adam’s mission is to save mankind from the first Adam’s fate. This mission begins in a desert, not a garden. So let’s complete our reimagining by putting in Adam and Eve’s place the one who tempted them out of Eden and into his desert of death.

In Sunday’s gospel account of the temptation of Jesus (Mt 4:1-11), Satan tries to do to the second Adam what he did to the first. But it’s actually Jesus who turns the tables on our nemesis. Through his first two temptations of Christ, Satan goes to his old playbook—appealing to humanity’s hungers of the body and mind, apparently believing Jesus was the same as every other man who came after the first one. But this new Adam actually tempts his tormenter into making a third vain attempt to re-seal mankind’s fate. In doing so, the tormenter takes the same bait the first Adam took—grasping for equality with God:

Then the devil took him up to a very high mountain, and showed him all the kingdoms of the world in their magnificence, and he said to him, “All these I shall give to you, if you will prostrate yourself and worship me.” At this, Jesus said to him, “Get away, Satan! It is written: The Lord, your God, shall you worship and him alone shall you serve.”

With this exorcism, both Jesus and Satan come to the full realization of what has to happen next. Satan is sent back into his Kingdom of death but humanity is about to be given a way out of it. Jesus spends the next three years of his earthly life showing us the way back to the Kingdom of God—the road to which we can find in our hearts.

The LORD God formed man out of the clay of the ground and blew into his nostrils the breath of life, and so man became a living being.

When the second Adam breathed his last breath, mankind breathed in its second wind. Upon that current we can all rise above the first Adam’s fate.