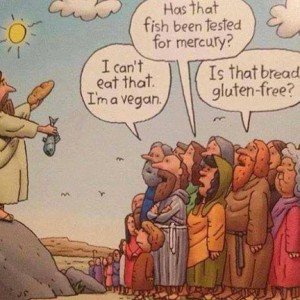 Marriage is the gift that keeps on giving—for comedians. Gag writers have drawn from this bottomless well of material since well before Henny Youngman said, “Take my wife. Please!” Even old married couples who’ve been together for half a century or more can have a little fun at their own expense when someone marvels,“Wow, all those years married to the same person; did you ever consider divorce?”

Way back in the early 20th century, comedian Jack Benny gave them a punchline that still draws laughs:

All good comedy has an element of truth. When it comes to people, the truth is, we’re insufferable.

Going even further back to the time of Moses, God’s chosen people lived that truth. They were nags. Sunday’s first reading (Ex 17:3-7) is almost comical as Moses complains to God about their badgering him for water. While reading this account from Exodus of how Moses’ people grumbled against him, imagine the high-pitched ungodly whine of your own five-year-old during any long car trip:

“Why did you ever make us leave Egypt? Was it just to have us die here of thirst with our children and our livestock?”

While most five-year-olds grow out of this stage, a remnant of such foolishness remains inside us well into adulthood and reveals itself during tough times. It explains why we needed saving from ourselves in the first place. In our second reading (Rom 5:1-2, 5-8) Paul explains for us the challenge Jesus faced on his mission to die for the ungodly:

Indeed, only with difficulty does one die for a just person, though perhaps for a good person one might even find courage to die. But God proves his love for us in that while we were still sinners Christ died for us.

But humanity caused him more than enough suffering before he died—the kind most married couples endure. Remember, the gospel of Mark has him referring to himself as his church’s bridegroom when he is asked why his disciples do not fast (MK 2:19).

Sunday’s gospel reading is a good example of how Jesus suffered the foolishness of his loved ones as he courted them (Jn 4:5-42). It tells of his encounter with a Samaritan woman at a well. All he has to do is ask her for some water and she goes into this separation-of-the-tribes diatribe:

This inspires Jesus to teach her a lesson about the difference between well water and wellness water, which is available to anyone who believes in him. To strengthen her faith in him he creates an opening for her to delve into the marriage routine she has been working on for years but has been trying to keep secret.

“Go call your husband and come back,” Jesus tells her.

“I do not have a husband,” she answers.

“You are right in saying, ‘I do not have a husband.’ For you have had five husbands, and the one you have now is not your husband.”

His prophetic insight converts her from living a life of lies into becoming a missionary for truth. She leads others to him, just as all others he inspired did. Their numbers have grown exponentially to form the church that became the bride to his bridegroom.

As we continue through this Lenten season, we could all stand to work on being more bride and less bridezilla.