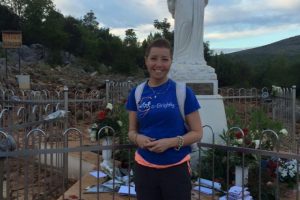 Holly Weller during her miraculous journey.

“Every day they devoted themselves to meeting together in the temple area and to breaking bread in their homes. They ate their meals with exultation and sincerity of heart, praising God and enjoying favor with all the people.”

This passage from Sunday’s first reading from Acts (Acts 2:42-47) describes the mood of the first witnesses to the glory of the risen savior. The same words could also describe the mood of a group of 21st century pilgrims who recently journeyed to Medjugorje to witness their own miracle. What they were hoping to see at this site (whose name they couldn’t even pronounce) in Bosnia-Herzegovina, and what they actually experienced, may be two different things—but the results were no less miraculous than those made possible in people’s hearts by the acts of the first apostles.

The journey of seven pilgrims to Medjugorje was captured in the film Apparition Hill. These seven people won a free trip to this site of the Virgin Mary’s 1981 appearance to several witnesses, some of whom claim they still see Mary on a regular basis. Being a true doubting Thomas, I believed this film to be a possible scheme by its producers to miraculously make its audience’s money disappear. After seeing it, though, I’m convinced the experience of these pilgrims—a couple of them self-professed atheists—matches the truth of the risen Lord that those early believers found in each other.

One of these pilgrims—Holly Weller, a young wife and a mother of four children—had a very specific goal: a cure for the stage-four cancer that was slowly killing her. She didn’t find that. What she did experience was the comforting presence of the Holy Spirit in the form of the six other strangers accompanying her to Medjugorje. They would all learn that the miracle they sought was found as much in each other on the journey to that hill, as it was for others at its summit. They gained the kind of inheritance Peter described in Sunday’s second reading (1 Pt 1:3-9):

“… an inheritance that is imperishable, undefiled, and unfading, kept in heaven for you who by the power of God are safeguarded through faith, to a salvation that is ready to be revealed in the final time. In this you rejoice, although now for a little while you may have to suffer through various trials.”

Yes, these seven were suffering their own trials, but throughout this trip they found the healing consolation of each other’s spirit. Upon their return home, the atheists still had questions about the reality of Marian miracles at Medjugorje, and Holly still had to make her final preparations for death, but they ultimately found the promise of a miracle in the new holy family they found on their pilgrimage.

The film ended with Holly’s ending, as she was surrounded by the family and friends who shed the love of the Holy Family upon her. All of them took back from that land whose name they couldn’t pronounce an indescribable peace they will carry with them to the summit of the Kingdom toward which we are all journeying. That was the same gift Jesus gave the first Doubting Thomas, as detailed in Sunday’s gospel reading (Jn 20:19-31). On this Divine Mercy Sunday, Christ’s message should resonate with all of us doubters still trying to get our heads around invisible miracles like those found in Medjugorje:

“Have you come to believe because you have seen me? Blessed are those who have not seen and have believed.”