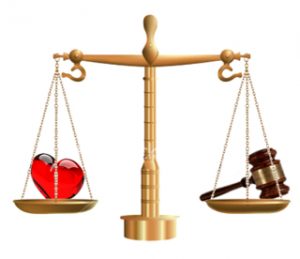 Humanity has figured out many of nature’s laws, but we’ve never mastered God’s physics. We tend to generalize it to our understanding of Newton’s law that every human action should have an equal and opposite reaction from God’s side of the balance. For many, this illusion of balance gives them comfort. So do defined borders that separate us from anything we don’t, can’t or won’t understand.  One of those things is God’s sense of proportion. It’s out of kilter to us. How could Jesus feed multitudes using five loaves of bread and a couple fish? How could he turn water into wine—or wine into blood, for that matter? And maybe most confounding for anyone relying on man’s laws to frame their concept of Godly fairness, how could Jesus promise eternal paradise at the last minute to the career criminal who was crucified next to him?  What happened to purgatory or some karmic payback for the evil he did all his life?

The answer is available via this Sunday’s mass readings. Isaiah put the answer beautifully in our first one (Is 55:6-9), addressing it to anyone seeking some sense of God’s scale of justice and proportion:

If that criminal crucified next to Christ had accepted man’s concept of proportion as final, he wouldn’t have wasted his final breaths asking Jesus to remember him as he entered his Kingdom. But the minute or two it took to make his request made up for the decades of sins he committed.

St. Paul’s conversion from persecutor of God’s people to one of God’s people was similarly instantaneous, but the reward he hoped would come with death would have to wait until he realized a reward he never counted on getting out of a few more years of life, as we see in his letter to the Philippians (Phil 1:20c-24, 27a):

Christ will be magnified in my body, whether by life or by death. For to me life is Christ, and death is gain. If I go on living in the flesh, that means fruitful labor for me.

The compensation for Paul’s fruitful labor wouldn’t come for several years—and even then not until after suffering a martyr’s death. But Paul was a latecomer to the discipleship of Christ, and a persecutor in his previous life to boot. Certainly the original 12—minus Judas—deserved more recognition than Paul in keeping with their early and eager acceptance of Jesus as Master! And while we’re on the topic of fairness, why was John, the youngest of the original 12, Jesus’ favorite and the only one to avoid martyrdom? That certainly wasn’t fair!

Our other example of God’s concept of proportionality comes via Sunday’s gospel from Matthew (Mt 20:1-16a), in which Jesus offers a parable that is sure to be one of the least favorites of modern-day business people. In it a landowner hires people to work for him as he goes through his day. At the end of the day, those hired last receive the same compensation as those who started the day bright and early.

When those who had started about five o’clock came, each received the usual daily wage. So when the first came, they thought that they would receive more, but each of them also got the usual wage. And on receiving it they grumbled against the landowner, saying, ‘These last ones worked only one hour, and you have made them equal to us, who bore the day’s burden and the heat.’ He said to one of them in reply, ‘My friend, I am not cheating you. Did you not agree with me for the usual daily wage? Take what is yours and go. What if I wish to give this last one the same as you? Or am I not free to do as I wish with my own money? Are you envious because I am generous?’ Thus, the last will be first, and the first will be last.”

Where have we heard of a similar arrangement in the news lately? In stories about young people who came undocumented to the US from other countries as infants and little children with their parents and who now hope to become US citizens. Many other immigrants who jumped through the necessary legal hoops to attain citizenship have a problem with that as do many US citizens who label this prospect unfair and illegal. The US Conference of Bishops has come out against deportation and in favor of granting citizenship to children who had no part in the decision to come to the US illegally. On the secular side of the balance, many politicians and citizens have told the hierarchy that the church’s stance isn’t based on doctrine.

If doctrine has anything to do with scripture, all you have to do is hear this Sunday’s readings to see a Biblical precedent. We’ll just have to grant Caesar his idea of doctrine while many of God’s disciples of every age have accepted and honored their Lord’s sense of proportionality—and hope to be living under that law an eternity longer than under Caesar’s.