What’s it like to lose yourself in order to accomplish something important? Mission Impossible. That was also the theme and the name of a hit TV show in the 60s which, years later, Tom Cruise would parlay into a movie franchise. The Impossible Mission Force was a team of agents who would often disguise themselves (mask and all) to rescue a lost cause. Once the impossible mission was accomplished, the disguised agent would peel off his/her mask and reveal who they were. The IM agents were successful because they were experts at suppressing their egos to take on other roles. A key point: they had free will. “Your mission—should you decide to accept it–…” was a memorable clause in each episode’s mission description.

Mission Impossible is also what it’s like to be an agent of God. Throughout history, many claiming to believe in God’s commandments have exercised their “free-will clause” to reject missions proffered by the Holy Spirit. Those missions were designed to change them and serve others by their example. Instead of changing into a disguise covering their existing identities, though, they were expected to open themselves to becoming a new creation so the spirit of God could accomplish impossible missions through them. As this Sunday’s readings show, the prerequisites of adopting attitudes of unconditional love and self-sacrifice were often seen as unfair expectations. Through the prophet Ezekiel, whose writing happens to be Sunday’s first reading, the spirit of the Lord responds to that complaint:

You say, “The LORD’s way is not fair!” Hear now, house of Israel: Is it my way that is unfair, or rather, are not your ways unfair? … Cast away from you all the crimes you have committed, and make for yourselves a new heart and a new spirit. Why should you die, house of Israel?

But for many, death seemed like an easier choice than renewal. And what was the mission that was too difficult for so many to accept?  Loving others as well as oneself, and therefore, loving God. Even today, many of life’s missions require these attitudes and thus fail miserably.  Accepting one’s mission in life requires giving up the egotistical illusion of mastery and making room for a new master whose existence is tied to sowing and growing love throughout his creation. In Sunday’s second reading, St. Paul retrains new generations for their mission, using the example God gave us when he went undercover as Jesus Christ. This is how his agents are to operate:

Do nothing out of selfishness or out of vainglory; rather, humbly regard others as more important than yourselves, each looking out not for his own interests, but also for those of others. Have in you the same attitude that is also in Christ Jesus, Who, though he was in the form of God, did not regard equality with God something to be grasped. Rather, he emptied himself, taking the form of a slave, coming in human likeness;

God disguised as one of us? That’s impossible!

Yes it is—which is why Jesus had to show how it’s done. His lesson was so effective, even the worst among us during his time on earth decided to accept our impossible mission, casting off their former selves so that the spirit of God could fill them and take over their lives. The amazing thing about this impossible mission is that Jesus made no secret of it during his earthly life. In fact he revealed his plan’s intricacies to those who grasped at the illusion of their own power so jealously and felt threatened by Jesus’ handle on it, as we see in Sunday’s gospel reading:

Jesus said to [the chief priests and elders of the people], “Amen, I say to you, tax collectors and prostitutes are entering the kingdom of God before you. When John came to you in the way of righteousness, you did not believe him; but tax collectors and prostitutes did. Yet even when you saw that, you did not later change your minds and believe him.” 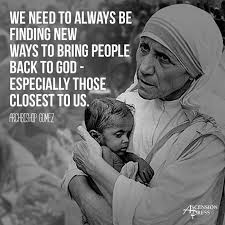 Our modern age is not too jaded to be awed by acts of righteousness. Our 21st century church made a saint out of someone who took on missions that for others were impossible to fathom—like cleaning toilets so the poorest of the poor could live in dignity.  Mother Teresa accepted that and many other impossible missions with joy. Sainthood peeled off her mask and revealed humanity’s true spiritual identity.

The moral of our impossible mission called life? Jesus revealed that secret too: “For God, all things are possible.”