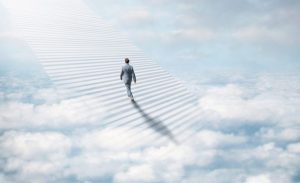 We tend to attend more and more funerals as we get older. The bright spot is that our advancing wisdom helps us appreciate good eulogies—those that truly capture the honoree’s character. I experienced one of those a couple weeks ago at the vespers service for Father Douglas Makowski. Father Doug devoted a few years assisting at St. Michael’s in Independence, but I really got to know him 45 years ago when he taught “Psychology of Man” at Padua Franciscan High School (he was also a spiritual advisor for the Franciscan order). His were my favorite lectures. What eulogist Father Charles Strebler said about Father Doug as a priest describes why he was such an effective psych teacher:  His feet were planted firmly in the realms of heaven and earth—which meant he could more effectively act as a bridge to bring humanity to God and God to humanity. That’s what the term pontiff means: builder of bridges. Although this word is usually reserved as a title for higher ranking clergy, it truly describes what Christ wants from all of his followers.

I can imagine Father Doug’s voice giving life to this Sunday’s mass readings—especially the gospel.  One lecture I remember him giving in high school was about the psychology of scandalizing. To scandalize is to offend someone’s moral sensibilities, and Father Doug was careful to explain that scandal is often in the mind of the beholder. He cautioned his students to be sensitive to others’ feelings so they could avoid unknowingly being guilty of offense. The gospels often showed how the Pharisees tried trapping Jesus into scandalizing them—and therefore scandalizing many who had the power to punish him for it. This Sunday’s gospel reading (Mt 22:15-21) not only illustrates an example of one of the Pharisees’ entrapment plots, but it shows how Christ psyched them out by teaching the art of keeping one foot on earth and the other in heaven.

“Tell us, then, what is your opinion,” the Pharisees asked Jesus “Is it lawful to pay the census tax to Caesar or not?”  Knowing their malice, Jesus said, “Why are you testing me, you hypocrites? Show me the coin that pays the census tax.” Then they handed him the Roman coin. He said to them, “Whose image is this and whose inscription?” They replied, “Caesar’s.” At that he said to them, “Then repay to Caesar what belongs to Caesar and to God what belongs to God.”

It’s funny that this psychological gospel reading involves a coin, because it is said that Sigmund Freud would sometimes suggest to his confused patients that they flip a coin—not to determine solutions, but to imagine debating a coin’s decisions. That would lead to more informed choices, he reasoned. Nevertheless, a coin toss is sometimes used as an easy-out for us when choosing between two equally compelling but competing sides. When heavenly vs. earthly decisions represent two sides of the same coin we toss, too often our fear lets the earthly side win. We are called to believe God fixes the fate of the faithful. He knows each of us intimately, after all. Remember how Luke quoted Jesus: “Even the hairs of your head have all been counted. Do not be afraid.”

Our first reading from Isaiah (Is 45:1, 4-6) illustrates how God uses that intimacy with humanity to help us build the foot bridge between us and Him. In this case the chosen one is Cyrus, and Isaiah names God’s choice well before this instrument of Jerusalem’s rebirth was even born.

For the sake of Jacob, my servant, of Israel, my chosen one, I have called you by your name, giving you a title, though you knew me not. I am the LORD and there is no other, there is no God besides me. 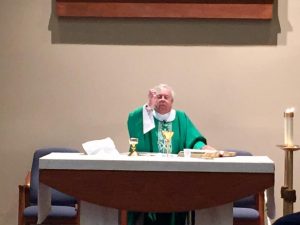 Father Doug’s gift for bridging our world with God’s prepared him to answer God’s call to many assignments over the course of 50 years. He took to heart the Lord’s priestly instructions as reported in Luke 9:3: Take nothing for the journey—neither walking stick, nor sack, nor food, nor money—and let no one take a second tunic. In his eulogy, Father Strebler said Father Doug didn’t need a U-Haul to help him make his career moves—everything he had fit into his humble little car. His focus was on transferring his teaching gifts, from Padua in the 60s and 70s to the Western Reserve Psychiatric Habilitation Center as its chaplain, and then to several parishes as pastor and vicar until he performed his final priestly duties at the Mount Alverna Village Nursing Home.

For the lasting lessons Father Doug left those who knew him, we can thank the Spirit of God, which informed those lessons. St. Paul perfectly voices our gratitude for such priestly inspiration via his letter to the Thessalonians, which is Sunday’s second reading (1 Thes 1:1-5b). It should inspire us to realize we were all chosen to play some part in building humanity’s bridge to God: 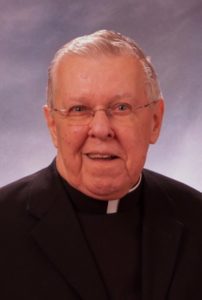 We give thanks to God always for all of you, remembering you in our prayers, unceasingly calling to mind your work of faith and labor of love and endurance in hope of our Lord Jesus Christ, before our God and Father, knowing, brothers and sisters loved by God, how you were chosen. For our gospel did not come to you in word alone, but also in power and in the Holy Spirit and with much conviction.

Father Doug lived by the courage of his spiritual convictions. His spirit passed from this world on September 30, 2017, at the earthly age of 78. In completing his final transfer, he gives back to God what belongs to God.