Power brokers in politics, sports and entertainment have recently given us plenty of opportunities to click our tongues and preach to our kids about how power corrupts, yet those of us who are parents sometimes fail to recognize how that also applies to the power we hold over those kids.  “Do as I say, not as I do” is a parental dogma dating back centuries. Yet we all have our own private closets in which we store memories we want to keep away from the kids, whether they involve drinking, 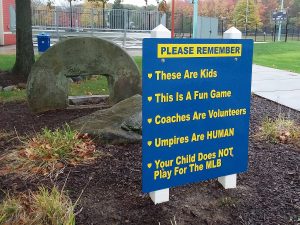 smoking, drugging or even sins worthy of a Hollywood closet.

Monuments to human hypocrisy are even posted in Little League ballparks, reminding parents not to harass umpires for any decisions going against their little ones. Such displays don’t only contradict the behavior lessons we attempt at home and expect our school teachers to impart, but they tell children that hypocrisy is normal—as normal as many instances presented in scripture.

Examples of such folly are laced throughout this Sunday’s Mass readings, too, and offer us a good opportunity for self-examination. In the first reading from Malachi (Mal 1:14b-2:2b, 8-10), we are reminded how far astray we’ve gone from the path we know is correct, and by doing so, allowed others to go in the wrong direction with us.

You have turned aside from the way, and have caused many to falter by your instruction; you have made void the covenant of Levi, says the LORD of hosts. … Have we not all the one father? Has not the one God created us? Why then do we break faith with one another, violating the covenant of our fathers?

We have no better example of the parental ideal than that displayed by St. Paul, whose followers were as dear to him as his own children. He took to heart Christ’s directive not to cause his little ones to go astray, as he shows in his letter to the Thessalonians (1 Thes 2:7b-9, 13), which is our second reading:

With such affection for you, we were determined to share with you not only the gospel of God, but our very selves as well, so dearly beloved had you become to us. You recall, brothers and sisters, our toil and drudgery. Working night and day in order not to burden any of you, we proclaimed to you the gospel of God.

As usual, it’s the gospel that gives us the most accurate reflection of our behavior. As ancient as the gospels are, they are spot-on in describing all of our 21st century hypocrisies. We are not far removed from the power players Christ depicted in Matthew’s gospel reading excerpted this Sunday (Mt 23:1-12):

“The scribes and the Pharisees have taken their seat on the chair of Moses. Therefore, do and observe all things whatsoever they tell you, but do not follow their example. For they preach but they do not practice. They tie up heavy burdens hard to carry and lay them on people’s shoulders, but they will not lift a finger to move them. All their works are performed to be seen. … Whoever exalts himself will be humbled; but whoever humbles himself will be exalted.”

Nothing tells the truth like a good parable, and though the movie industry is chief among history’s moral hypocrites, it’s also a rich source of cinematic wisdom dating back to the silent era. Let’s close with an example from Sweden. The Phantom Carriage (1921) tells the legend of the Grim Reaper who collects souls as they depart this realm. Next on the Reaper’s list in this film is a man guilty of neglecting and abusing his wife and children and carelessly spreading the communicable disease with which he is infected. But just as Scrooge was in Dickens’ A Christmas Carol, this soul is given an opportunity to see how his behavior has scarred his family, and after the Reaper gives him a second chance, he tearfully prays: “Lord, let my soul come to maturity before it is reaped.”

A great prayer for all of us hypocrites.