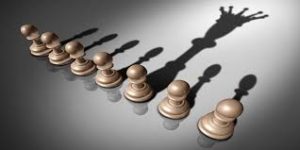 A famous quote from William Shakespeare’s Twelfth Night applies to the stars of each of our three readings for this third Sunday of Advent:

In the first reading (Is 61:1-2a, 10-11), the prophet Isaiah doesn’t flatter himself by saying God thrust greatness upon him; however, the way he describes his mission is the mark of a man who at some point achieved spiritual greatness:

The spirit of the Lord GOD is upon me, because the LORD has anointed me; he has sent me to bring glad tidings to the poor, to heal the brokenhearted, to proclaim liberty to the captives and release to the prisoners, to announce a year of favor from the LORD and a day of vindication by our God.

Although St. Paul had greatness thrust upon him, his pre-great self was far from it. As Saul of Tarsus he was a great persecutor of Christ’s disciples. His Road to Damascus conversion to Christianity was accomplished with a trial of character encompassing blindness and fasting. The greatness Paul achieved might have found him, but he embraced the mission it demanded of him and in Sunday’s second reading he tells the Thessalonians how the greatness of God’s spirit is achieved and spread (1 Thes 5:16-24):

Brothers and sisters: Rejoice always. Pray without ceasing. In all circumstances give thanks, for this is the will of God for you in Christ Jesus. Do not quench the Spirit. Do not despise prophetic utterances. Test everything; retain what is good. Refrain from every kind of evil.

As for being born to greatness, Jesus Christ himself embodies that one, although in Shakespeare, being born to greatness is nothing to brag about. Some pretty goofy people were born into royalty in Shakespeare’s tales. Jesus was royalty born of a peasant queen. As for his “cousin” John, even Jesus said that among those born of women, there were none greater than John the Baptist. (Mt 11:11-15)—Yet the least in the Kingdom of Heaven are greater than he. This Sunday’s gospel reading has John agreeing with that assessment, as he tells Jerusalem’s priests and Levites of the one who is coming after him, whose sandal strap he was not worthy to untie (Jn 1:6-8, 19-28).

John’s greatness was exercised through his testimony to the light. He was born into the belief that the one who would come after him would open the kingdom of heaven to the least among us whom the spirit blessed with greatness—as expressed through their holiness.