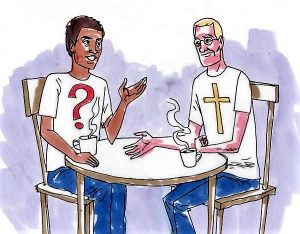 I recently saw an atheist do a pretty good imitation of Jesus. It brought to mind the angry Jesus we read about in this Sunday’s gospel passage from John (Jn 2:13-25)—the one where he turns over tables full of merchandise for sale in the temple and chases away the marketers who made a bazaar of his Father’s house.

“Take these out of here, and stop making my Father’s house a marketplace,” Jesus said.

The marketplace where I saw this imitation of Christ was the marketplace of predominantly secular ideas known as Facebook. In one forum I frequent someone posed a question for discussion: “What’s the most overrated cult book you’ve ever read?”  Participants in this forum cited several science fiction novels like Dune, Lord of the Rings, even the Harry Potter series, and then came the answer that brought to mind that scene in John’s gospel.

“The Bible,” someone answered.

As someone who set up a stand on Facebook hawking this biblical blog you’re now reading, I felt like this person was tipping over my tableful of scriptural observations—even though he never set a proverbial foot anywhere near it. This was the tipping point I perceived from his side of the table:

“I’m sure the Bible was very helpful before science became more the predominant way to be a moral and productive human being,” he typed. “Nowadays its antiquated views and lack of moral polarity make it a dinosaur written back when men kept slaves, beat their wives, committed genocide and did not know where the sun went at night.”

Adding fire to his argument, this Sunday’s first reading from Exodus includes this (Ex 20:1-17):

You shall not covet your neighbor’s wife, nor his male or female slave, nor his ox or ass, nor anything else that belongs to him.”

Meanwhile, back at the forum, I tried setting my tipped-over table back up, making the argument that one “shouldn’t judge this book by its cultists” who take every line of the Old Testament literally. I tried noting that the Bible is a book of truths that is constantly being updated for relevance in their lives by its audiences of one.

“I’m constantly finding nuances in some of the same old passages I’ve read many times before,” I argued. “Our changing lives and growing wisdom rewrite it for us. This is not a book you surface-read cover to cover. This is a book whose truths you continuously rediscover.”

Then this anti-Bible zealot suddenly turned peacemaker—one of the classes of God’s beloved Jesus cited in his beatitudes.

“You’re a good guy and a respectful debater,” he wrote. “The problem I have is mostly with the Old Testament verses. Arguably they cannot be taken to heart in this day and age. Truth and facts must be able to pass a burden of proof. In my world if it cannot be replicated it’s not a truth or a fact. It’s a theory. “

We ended up agreeing to disagree. But in recalling this little exchange for this week’s blog, leave it to St. Paul to offer a decent comeback to anyone who swears by this world’s truths. It comes courtesy of Sunday’s second reading (1 Cor 1:22-25), an excerpt from Paul’s first letter to the Corinthians:

My atheistic friend and I are both zealots, and I must admit, I respected his zeal—but I love how the Bible gives even atheist zealots lots to chew on. Here’s one more morsel for him and everyone else on his debating team, served up courtesy of Christ’s original disciples in Sunday’s New Testament gospel reading (Jn 2:13-25)—by zealots who were inspired by Old Testament truths:

His disciples recalled the words of Scripture, “Zeal for your house will consume me.”