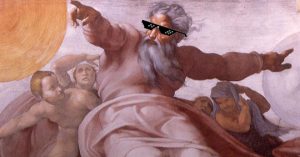 A Hollywood starlet appearing recently on a popular late-night talk show recalled her Catholic upbringing. She proudly described it as a phase she outgrew. She credited her father for unwittingly inspiring her maturation. He warned her against having premarital sex as she entered her first romantic relationship—“or else you’ll spend an eternity in hell,” he promised.

Turns out, the greater sin was his—by depicting our faith as a slaveholder rather than as a liberator of slaves, he killed her soul’s desire to know true freedom. Her father was no better than the crowd in Jesus’ company who were preparing to kill a woman for committing adultery. By saying “Let those without sin cast the first stone,” Jesus not only saved the woman’s life but her faith as well. After shaming the stoners into walking away, he then admonished the woman to go and sin no more. By doing so he also reminded her that though she and her persecutors were sinners, they have a Father who loves them despite their fallen nature. All they have to do to accept that love is share it with each other—thereby freeing more and more from the selfish slavery that separates souls from God.

If Dad had pointed his daughter toward that humble path to heaven rather than focusing on her taking the proverbial fiery freeway to hell, this starlet might be spreading the faith of her father rather than mocking it.

Her ignorance is a good reminder of why we have a Palm Sunday, though. This day is named for the palms people waved to welcome the king they thought would free them from their earthly slaveholders. What they didn’t understand, just like that starlet and her dad, is that Jesus came to defeat the spiritual slaveholder within each of us.

This Sunday’s reading of Christ’s Passion according to Mark (Mk 14:1—15:47) reminds us that Jesus knew the daunting task ahead of him—and his right-hand man Peter gave the Master an excuse to remind his disciples of the battle they will face when he passes his mission of salvation on to them.

“All of you will have your faith shaken, for it is written: I will strike the shepherd, and the sheep will be dispersed. But after I have been raised up, I shall go before you to Galilee.” Peter said to him, “Even though all should have their faith shaken, mine will not be.” Then Jesus said to him, “Amen, I say to you, this very night before the cock crows twice you will deny me three times.”

And mankind’s Hollywood mindset about Christianity and hellfire has caused millions more to deny Jesus ever since. Our problem has always been ignorance of what Jesus means to humanity. The Hollywood mindset goes back to the original Palm Sunday and presumes a need for pomp and pageantry to defeat our faith’s oppressors. But instead, here comes this humble man, riding into town on a humble colt—not exactly the conquering hero the crowd greeting him had in mind (Jn 12:12-16):

When the great crowd that had come to the feast heard that Jesus was coming to Jerusalem, they took palm branches and went out to meet him, and cried out: “Hosanna! “Blessed is he who comes in the name of the Lord, the king of Israel.”

Paul tells us in our second reading of the real nature of this King, and reminds us of how he came to save us from our self-damning ignorance (Phil 2:6-11):

Maybe if that starlet’s dad had emphasized the humility required to make any relationship with a fellow human work (romantic or not), she would have a better understanding of our faith’s conquering hero than those palm-wavers in Jerusalem demonstrated 2000 years ago.