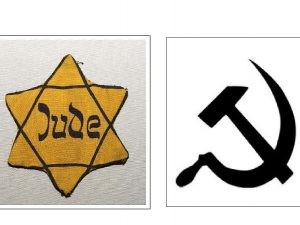 This was the heart of Marxism and other socialist utopian philosophies at their beginnings, but as we know, mankind’s sinful nature managed to corrupt whatever purity it might have represented into a support system for some of history’s most evil regimes. That corruption explains how the evils committed under Communism could encourage evils on the opposing side to prevail against them. Because of Marxism we had McCarthyism and blacklists. Human beings aren’t very good at delivering themselves from their evils.

Yet this Sunday, as we recall the time when Christ’s disciples tried getting organized to carry on their Master’s work, our first reading from Acts (Acts 4:32-35) describes the purity of their plan:

The community of believers was of one heart and mind, and no one claimed that any of his possessions was his own, but they had everything in common. With great power the apostles bore witness to the resurrection of the Lord Jesus, and great favor was accorded them all. There was no needy person among them, for those who owned property or houses would sell them, bring the proceeds of the sale, and put them at the feet of the apostles, and they were distributed to each according to need.

What saved this organization from the evils added by the Marxists and socialists who would hijack that philosophy for their earthly utopias was faith in a higher realm. That realm is The Kingdom of God and its rule of law is simply love, not some manipulative, wordy political manifesto.  In our second reading (1 Jn 5:1-6), John explains the workings of this law in three sentences:

Humanity’s corruptions of law and soul are behind our history’s most evil forces. Just as Sunday’s first reading can remind us how the evils of communism hijacked the beauty of what Christ’s disciples accomplished 2000 years ago, the gospel reading contains a sentence that could have been the inspiration for an ancient evil force that thrives to this day: antisemitism. Despots have used the persecution and crucifixion of Christ to justify their hate of anyone espousing Judaism. Some find justification in John’s description of the disciples’ hideout (Jn 20:19-31):

On the evening of that first day of the week, when the doors were locked where the disciples were, for fear of the Jews, Jesus came and stood in their midst.

Before looking at the lesson that followed John’s scene-setting, let’s remember the evils that justified the disciples’ fear of some of the Jewish leaders. It was the fear those leaders had of what Christianity would mean to their grasp on power. By dying on the cross, Christ’s design was to free humanity from such earthly servitude to fear. But evil forces used the punishment Jesus suffered to justify one of the hatreds that still fuels war to this day. So as we continue this gospel passage, let’s take Jesus’ greeting to heart as he staged this surprise visit to his disciples:

“Peace be with you.” When he had said this, he showed them his hands and his side. The disciples rejoiced when they saw the Lord.

But one of these disciples would give their Master a final opportunity to teach them a valuable lesson about a major challenge they would face as they continued his earthly mission: disbelief.

Thomas, called Didymus, one of the Twelve, was not with them when Jesus came. So the other disciples said to him, “We have seen the Lord.” But he said to them, “Unless I see the mark of the nails in his hands and put my finger into the nailmarks and put my hand into his side, I will not believe.” Now a week later his disciples were again inside and Thomas was with them. Jesus came, although the doors were locked, and stood in their midst and said, “Peace be with you.” Then he said to Thomas, “Put your finger here and see my hands, and bring your hand and put it into my side, and do not be unbelieving, but believe.” Thomas answered and said to him, “My Lord and my God!” Jesus said to him, “Have you come to believe because you have seen me? Blessed are those who have not seen and have believed.”

It would be up to this band of twelve innocents to represent the truth of Christ’s risen body to a world capable of warping a component of “The Way” into a Godless political tenet or of using his death to twist his message of love into one of hate. One of Christ’s teachings that can’t be warped or reinterpreted is The Lord’s Prayer, and its final line can be used as a simple petition to God against humanity’s worst sins: “Deliver us from evil.”

Especially those evils thriving inside us.