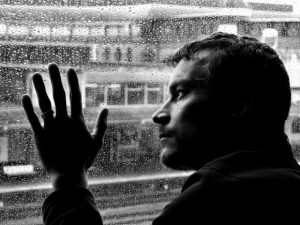 Nothing is uglier than a bad separation—except a separation with a restraining order. We’re witnesses to the aftermath of humanity’s separation from God in this Sunday’s liturgy honoring the solemnity of the Most Holy Body and Blood of Christ. In Sunday’s first reading (Ex 24:3-8), Moses is instrumental in delivering the first covenant of reconciliation. It’s apparent at least part of the restraining order is still in effect, since, according to Mosaic law, humanity couldn’t come near to God. There were exceptions, scripture tells us, since priests could enter the Holy Place (Heb 2:6), but only the high priest could enter the Holy of Holies– and then only once a year (Heb 9:3–5, 7).  Moses was used as the intermediary between God and His people, as our first reading implies:

When Moses came to the people and related all the words and ordinances of the LORD, they all answered with one voice, “We will do everything that the LORD has told us.” Moses then wrote down all the words of the LORD and, rising early the next day, he erected at the foot of the mountain an altar and twelve pillars for the twelve tribes of Israel. … Taking the book of the covenant, he read it aloud to the people, who answered, “All that the LORD has said, we will heed and do.” Then he took the blood and sprinkled it on the people, saying, “This is the blood of the covenant that the LORD has made with you in accordance with all these words of his.”

But a second covenant was part of God’s plan. He never stopped loving his children, after all, and maybe the first covenant’s restraining order served its purpose by paving the way to the second. That one called for God finding someone of the human race suitable to deliver the new instrument of reconciliation. Her name was Mary, and she represented a new bond of blood between God and humanity. With her son’s birth, the first covenant became null and void. No longer would the blood of third parties—dumb animals– be sufficient to seal that bond. God was prepared to shed His own blood, through Jesus the Christ. At the same time, humanity was required to put skin in the game. It represented that perfect union of God and Man. In Sunday’s second reading (Heb 9:11-15), Paul explains how that second covenant works:

When Christ came as high priest of the good things that have come to be, passing through the greater and more perfect tabernacle not made by hands, that is, not belonging to this creation, he entered once for all into the sanctuary, not with the blood of goats and calves but with his own blood, thus obtaining eternal redemption.

The Solemnity of the Body and Blood of Christ is a celebration of that reconciliation between the divine and the human. The first reading had Moses delivering the terms of the first covenant, bringing it down from a high mountaintop and making it available to his people. The second covenant was more direct and personal. It put God face to face with his people—not high on a mountaintop but within the intimacy of an upper room. What happened in that room presaged the sacrifice God would make on the cross. We have the privilege of sharing in that intimacy every time we participate in the sacrifice of the mass. Each liturgy brings us closer to when we will celebrate that reconciliation with our Father at see-level—no longer restrained by an unclimbable altitude. Sunday’s gospel reading from Mark (Mk 14:12-16, 22-26) makes us participants in what happened on the second floor of a lowly building in a holy city:

That sacrifice paid for humanity’s original sin once and for all, removing the restraining order imposed due to the love our ancestors disavowed. The Second Covenant of Christ tells us the reclamation of that love requires us to share it beyond the lowly borders of self and ascend to a sense of other. That’s where we’ll find God—in love that is shared without restraint. Our God is a trinity, after all—Father, Son and Spirit. That spirit lives in the upper chamber of our heart.