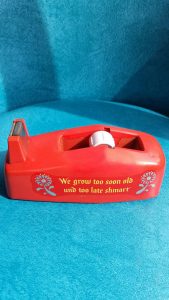 A half century ago, my mother had a Scotch tape dispenser with this little piece of Pennsylvania Dutch wisdom inscribed on its side:

“We grow too soon old and too late smart.”

In today’s era of pervasive marketing, the Scotch Tape Company might be more likely to ditch that proverb for a product positioning statement:

“It’s amazing what you can do with a little faith and a lot of Scotch Tape.” 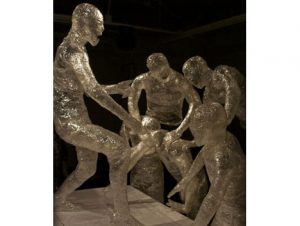 The gospels tell us Jesus was amazed and surprised by humanity several times, but one of those instances doesn’t speak well for our faith supply. This Sunday’s reading from Mark’s gospel proves we haven’t grown much wiser since Jesus’ time on earth (Mk 6:1-6). The people of his own town were witnesses to the great deeds the Holy Spirit worked through Jesus, but they couldn’t bring themselves to believe that a commoner like them could be an instrument of God’s inspiration:

They said, “Where did this man get all this?  What kind of wisdom has been given him? What mighty deeds are wrought by his hands! Is he not the carpenter, the son of Mary, and the brother of James and Joses and Judas and Simon? And are not his sisters here with us?” And they took offense at him. Jesus said to them, “A prophet is not without honor except in his native place and among his own kin and in his own house.” So he was not able to perform any mighty deed there, apart from curing a few sick people by laying his hands on them. He was amazed at their lack of faith.

This passage tells us we are meant to be beneficiaries of God’s great wisdom, but we must believe we’re part of His plan. Yes we are only human, but as Paul tells us through his second letter to the Corinthians (2 Cor 12:7-10), that acknowledgment should strengthen our faith, not give us an excuse to hide from inspiration. Christ was trying to give us a picture of what can be accomplished through us—weak though we are on our own. Paul, after being forced to face his evils and inadequacies while on the road to Damascus, soon realized the miracles that could be worked through his own rebirth and submission to God’s will.

I will rather boast most gladly of my weaknesses, in order that the power of Christ may dwell with me. Therefore, I am content with weaknesses, insults, hardships, persecutions, and constraints, for the sake of Christ; for when I am weak, then I am strong.

Sunday’s first reading, though the oldest of the three, gives us a picture of today’s humanity, as seen through the eyes of the prophet Ezekiel (Ez 2:2-5). Ezekiel’s mission involved the Israelites of his time, but how different are we from them?

Son of man, I am sending you to the Israelites, rebels who have rebelled against me; they and their ancestors have revolted against me to this very day. Hard of face and obstinate of heart are they to whom I am sending you. But you shall say to them: Thus says the LORD GOD! And whether they heed or resist—for they are a rebellious house—they shall know that a prophet has been among them.

“Prophet” is a loaded term. Its misinterpretation is what kept so many of the people of their time from accepting Ezekiel, Paul and Jesus as manifestations of God’s wisdom. Simply put, a prophet is “an inspired teacher or proclaimer of the will of God.” That wisdom was meant for all of us, not just the Son of God. As John tells us, Jesus told his disciples: “Amen, amen, I say to you, whoever believes in me will do the works that I do, and will do greater ones than these, because I am going to the Father. And whatever you ask in my name, I will do, so that the Father may be glorified in the Son. If you ask anything of me in my name, I will do it.”

If you believe that the age of miracles is in the past and humanity’s faith is broken, a little wisdom can be a miraculous supplement for a lot of tape when making repairs.

Now, just for fun, the video below will show you how adhesive tape, artfully applied by one who has been inspired, can in turn, inspire others. If inspiration works this well with tape, think what can be done with God’s raw material: His Word.