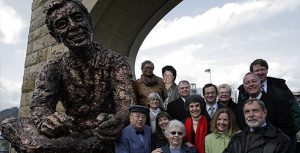 For such a seemingly meek man, Mr. Rogers wielded a lot of power in his neighborhood. Many young adults grew up watching Mr. Rogers’ Neighborhood on Public Television, finding solace in his humble, friendly, accepting manner. He offered them the kind of friendship that was lacking in their own neighborhoods—or even in their own families. Mr. Rogers didn’t invent this as shtick. As a new documentary shows us, he was simply living the word of God. That was easy for him.

What was not so easy is doing that in an industry where the word of God is a foreign language. Yet millions of little children understood it perfectly and took strength from its simple wisdom. They didn’t need a lot of glitzy techno special effects or superhero cartoons. Mr. Rogers’ was also an ordained minister, so as a man of God he was following orders just as all people of God did throughout scripture—especially the readings from this Sunday’s mass. All of the men of God who are spotlighted were of humble origin—and chosen in accord with God’s plan for all of us to be prophets for each other. In that way, God’s word spreads like a contagion.

Let’s start with Amos, from our first reading (Am 7:12-15). We hear him explaining his mission to Amaziah, priest of Bethel, who is blind to what this man he called a “visionary” wanted him to see.

Amos answered Amaziah, “I was no prophet, nor have I belonged to a company of prophets; I was a shepherd and a dresser of sycamores. The LORD took me from following the flock, and said to me, Go, prophesy to my people Israel.”

Paul was not born of such humble origin as Amos—unless you consider the road to Damascus as the origin of his rebirth. It was there that God’s revelation struck him temporarily blind. But as Paul tells the Ephesians in Sunday’s second reading (Eph 1:3-14 or 1:3-10), all lives are to be lived with one purpose–

–destined in accord with the purpose of the One who accomplishes all things according to the intention of his will, so that we might exist for the praise of his glory, we who first hoped in Christ.

That existence thrives on word and deed, not rank. Truth doesn’t require anything else to help us make God’s case, as Jesus proved through his choice of messengers (recalled in Sunday’s gospel reading, Mk 6:7-13):

He instructed them to take nothing for the journey but a walking stick—no food, no sack, no money in their belts. They were, however, to wear sandals but not a second tunic.  He said to them, “Wherever you enter a house, stay there until you leave.”

God is still making humble prophets. Mr. Rogers taught a couple generations of children the importance of loving and respecting others. Like Amos, Rogers would probably deny that in spreading God’s word through deeds he deserved such a mighty title. Nobody does, just as nobody deserves salvation. It’s a gift and a responsibility. In 2015, Pope Francis recited the “Prayer of Oscar Romero” before superiors of the Roman Curia describing all neighbors in the Kingdom of God. It states:

We accomplish in our lifetime only a tiny fraction of the magnificent enterprise that is God’s work. Nothing we do is complete, which is a way of saying that the Kingdom always lies beyond us. … We are workers, not master builders; ministers, not messiahs. We are prophets of a future not our own.

But as His children, we hope to share in the fruit of each other’s prophecies.

Now enjoy this beautiful rendition of the Romero prayer as recited by a nice cross-section of our neighbors.