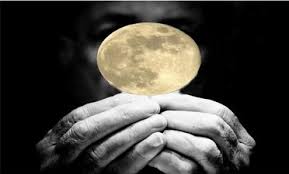 “First Man” is a recent movie recalling Neil Armstrong’s first steps on the moon. Before its release, many patriotic reviewers got their nose out of joint because the film didn’t depict the planting of the American Flag on the moon. I think there was a more glaring omission, though. It involved another first: the first words of God ever spoken on the moon. Armstrong’s partner, Buzz Aldrin, the second man on the moon, brought with him a communion wafer and a small chalice. While the film makers focused on framing this mission as a human achievement—not just an American one—the scripture reading Aldrin brought with him (John 15:5) gave the lie to both of those assessments:

I am the vine, you are the branches. Whoever remains in me and I in him will bear much fruit, because without me you can do nothing.

This Sunday’s mass readings are a powerful demonstration of how the writers of scripture have always made the connection between the contents of our universe and their Creator. What fills outer space sets the highest standard of beauty humanly conceivable, which is why humanity has always gauged greatness by the stars. Start with the first reading from Daniel (Dn 12:1-3):

“But the wise shall shine brightly like the splendor of the firmament, and those who lead the many to justice shall be like the stars forever.”

But, lest humanity think too highly of their ranking in the universe, the second reading taken from Hebrews (Heb 10:11-14, 18) brings us back down to earth, stating that even the highest ranking humans—even those who found their way to the surface of the moon—could make that trip again and again and still come no closer to achieving what Jesus accomplished once and for all via his earthly mission.

Every priest stands daily at his ministry, offering frequently those same sacrifices that can never take away sins. But this one offered one sacrifice for sins, and took his seat forever at the right hand of God; now he waits until his enemies are made his footstool. For by one offering he has made perfect forever those who are being consecrated. 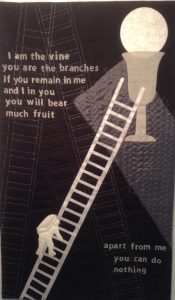 Christ, the soul and substance of that offering, used terminology all students of space could relate to when he gave his disciples a preview of the fate of their universe. Maybe the greatest proof of universal truth taken from that moon mission wasn’t the photo of Neil Armstrong’s first footprint, but the words of scripture his partner spoke just a few footprints away from him: “Without me you can do nothing.” In this Sunday’s gospel reading (Mk 13:24-32), Mark expands on John’s quote of their Master, telling us how vain it is to search for truth on dusty faraway rocks:

“The sun will be darkened, and the moon will not give its light, and the stars will be falling from the sky, and the powers in the heavens will be shaken. … Heaven and earth will pass away, but my words will not pass away.”

That should give all of us faith in an unearthly beauty waiting for us beyond time and space because those eternal words must be heard.