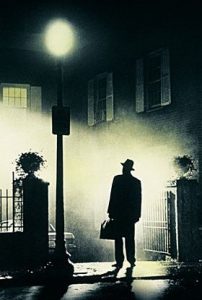 Around Halloween, there was a TV special on the scariest movies ever made. The Exorcist topped the list—and this list included some truly frightening stories. But what makes the Exorcist so scary isn’t the projectile vomiting of pea soup or the 360? head rotation. The scariest thing is its truth. In one of the film’s pivotal scenes, as Fathers Karras and Damien prepare to confront the demon possessing the little girl at the center of this story, the battle-scarred and aging Father Karras gives young Father Damien a stern warning:

“The demon is a liar. He will lie to confuse us; but he will also mix lies with the truth to attack us. His attack is psychological, Damien. And powerful.”

This scene from the world’s scariest movie echoes a scene from John’s gospel (John 8:44) where Jesus is confronted by a crowd accusing him of lies and blasphemy. They take issue with his contention that he was sent by God. Jesus turns the tables on them by exposing their own lineage:

You belong to your father the devil and you willingly carry out your father’s desires. He was a murderer from the beginning and does not stand in truth, because there is no truth in him. When he tells a lie, he speaks in character, because he is a liar and the father of lies. But because I speak the truth, you do not believe me.

This Sunday’s mass honors Jesus as “King of the Universe.” His universe is truth, and in the gospel reading—also from John—Jesus faces Pilate, the accuser whom God used to fulfill Christ’s destiny (Jn 18:33b-37):

So Pilate said to him, “Then you are a king?” Jesus answered, “You say I am a king. For this I was born and for this I came into the world, to testify to the truth.  Everyone who belongs to the truth listens to my voice.”

This Sunday we celebrate Jesus as the leader of an eternal kingdom called the truth. Last Sunday’s gospel reading from Mark told us that kingdom’s indestructible foundation is God’s word:

“Heaven and earth will pass away, but my words will not pass away,” Jesus told us.

This fulfills Daniel’s prophesy, which gives us this Sunday’s first reading (Dn 7:13-14):

The one like a Son of man received dominion, glory, and kingship; all peoples, nations, and languages serve him. His dominion is an everlasting dominion that shall not be taken away, his kingship shall not be destroyed.

As Sunday’s excerpt from The Book of Revelation tells us (Rv 1:5-8), the King of Truth is also King of Kings, born to testify on our behalf so that we may be saved from the King of lies .

Jesus Christ is the faithful witness, the firstborn of the dead and ruler of the kings of the earth. To him who loves us and has freed us from our sins by his blood, who has made us into a kingdom, priests for his God and Father, to him be glory and power forever and ever. Amen.

The idea of being taken prisoner by the King of Lies is more frightening than anything humanity can spit out on film—unless that film is a home movie holding up a mirror in which we catch ourselves in the embrace of our own inner demons.