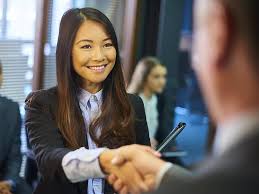 Employers can’t seem to hang onto talent very long in this “Employee’s Market.” The Wall Street Journal reports that the share of workers voluntarily quitting their jobs hit a 17-year high in 2018. The article offers employees advice on parlaying their advantage into higher pay. It doesn’t offer much advice to employers about stemming their talent bleed, though. How about this advice, inspired by scripture:

The best way to keep talent is to help talent see it in themselves.

One way is to offer and emphasize volunteerism. Employers that seem to inspire the most loyalty reward workers who demonstrate selflessness and compassion by volunteering in their communities. Smart companies recognize that volunteerism grows both character and skill. This Sunday’s liturgy offers inspiration for both employees and employers.

Many workers are like the prophet Isaiah in Sunday’s first reading (Is 6:1-2a, 3-8). They don’t think they’re up to the advancements the boss offers, and they’re too ashamed, while sharing a fleeting meeting in the hallway, to ask for a chance. They think, as they gaze into the boss’s eyes, like Isaiah, “I’m not worthy,”

“Woe is me,” Isaiah says, “I am doomed! For I am a man of unclean lips, living among a people of unclean lips; yet my eyes have seen the King, the LORD of hosts!”

You may not think of your earthly boss as Lord of Hosts, but that person probably got to his or her position by seeing potential in all employees, and by constantly seeking volunteers to accomplish a shared mission. They, like Isaiah, may owe their own success story to a breakthrough moment with their boss:

Paul has the same low opinion of himself Isaiah did, but in Paul’s case, that opinion has merit. After all, he persecuted and prosecuted the Boss’s star employees. But the Boss sees the same kind of potential in Paul that he saw in Isaiah, and Paul takes the ball his Boss passes to him and runs with it, as he explains in Sunday’s second reading (1 Cor 15:1-11 ):

“Last of all … he appeared to me. For I am the least of the apostles, not fit to be called an apostle, because I persecuted the church of God. But by the grace of God I am what I am, and his grace to me has not been ineffective. Indeed, I have toiled harder than all of them; not I, however, but the grace of God that is with me.”

The Boss’s technique for giving lowly but promising candidates a chance has withstood the test of time. The Boss’s Son was famous for taking his Father’s technique for hiring prophets and applying it to his own staff. Paul was a later hire, but the methodology was the same. Give your most unworthy disciples a chance and watch them catch on. Catch they did, as Sunday’s Gospel tells us (Lk 5:1-11):

“They caught a great number of fish and their nets were tearing. They signaled to their partners in the other boat to come to help them. They came and filled both boats so that the boats were in danger of sinking. When Simon Peter saw this, he fell at the knees of Jesus and said, “Depart from me, Lord, for I am a sinful man.”  …  Jesus said to Simon, “Do not be afraid; from now on you will be catching men.”

Since that hire, the job of catching men and women has grown in importance and difficulty. Too many of us have hidden ourselves away in the comfortable grey office towers of secularism. In them, human laws make it harder for God’s prospects to do the same honest self-assessment Peter did. We can be law abiding citizens and still be guilty of breaking God’s law. Thou shall not kill? Thanks to a newly-passed New-York-State law, killing a 9-month-mature baby up to the point of birth  is legal. One World Trade Center, the site where 3,000 innocent people lost their lives to terrorism almost 18 years ago, was lit pink in celebration of a law that will enable the killing of many more innocents.

In this kind of environment, volunteerism is Job One. The Boss has made opportunities plentiful, from helping pregnant mothers see hope for raising their babies, to changing the hearts of lawmakers, to showing up at pro-life events, to just showing up in front of The Boss and praying for humanity—born and unborn.

That last one is easy because The Boss’s door is always open. Want an hour with Him? Just walk through the front door of your local church and park yourself in front of the Blessed Sacrament. If that church has a perpetual adoration program, sign up for your own hour and show up regularly. As some of the brightest business people will tell you, just showing up is 80% of success—and a powerful prayer in itself, The Boss might add.

P.S.: If you’re reading this before March arrives, you have a special opportunity to grab The Boss’s ear. On March 7th, while the Bringing America Back to Life Convention happens in Independence (at Embassy Suites March 8th and 9th), you can participate via prayer at a Right to Life Mass to be offered by Bishop Roger Griese at St. Michael Church (Independence) at 5:30 pm. Then, you can schedule your own hour with the Blessed Sacrament during the perpetual adoration following mass, from 6:30 pm Thursday through 10 pm Saturday, March 9th. To lock in your hour of meditation before the Blessed Sacrament, go to www.volunteersignup.org/9MHRL .