Older readers might remember a guy named Paul Harvey. He became best known for his “The Rest of the Story” radio features reporting the unsung outcomes of often-told stories.  Sunday’s gospel reading includes the Prodigal Son parable, which ends famously with a father happily welcoming his ne’er-do-well son back home after that son squandered his inheritance. Happy ending. But did it stay happy? In concert with Sunday’s other two readings, we should consider the rest of the story.

In the first reading (Jos 5:9a, 10-12), after a lot of grumbling and bellyaching on the part of the Israelites to Moses during their journey through the desert, God shows mercy by feeding them manna from heaven. Eventually they inherit a land flowing with milk and honey. No more manna from heaven needed. The Israelites became what humans were meant to be: free souls who enjoyed the fruit of the land they inherited.  Happy ending?

And now, the rest of the story. The milk and honey only flow if we fend off the bees to cull the honey from the comb and get up early enough to milk the cows.

In other words, we have to work to keep those flows going.

On that same day after the Passover, on which they ate of the produce of the land, the manna ceased. No longer was there manna for the Israelites, who that year ate of the yield of the land of Canaan.

Similarly, Christ died to make us eligible for the salvation he made possible. As St. Paul says in our second reading (2 Cor 5:17-21), God the Father let his son become sin so we could become righteous—and thus reclaim the inheritance Adam lost.  We aren’t related to the first Adam anymore, we belong to the second.

Whoever is in Christ is a new creation: the old things have passed away; behold, new things have come. And all this is from God, who has reconciled us to himself through Christ.

What’s the rest of this story? All the assets discussed in Sunday’s readings were freely offered by God as our inheritance. They weren’t earned. The Father of the Prodigal Son forgave the boy for everything and reestablished his good credit rating. The other son, the “good” one, didn’t like that so much and became jealous, just as the Pharisees and scribes did when they saw Jesus fraternizing with sinners (Lk 15:1-3, 11-32):

The Pharisees and scribes began to complain, saying, “This man welcomes sinners and eats with them.” So to them Jesus addressed this parable.

The Parable of the Prodigal Son. 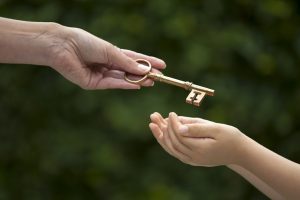 But Jesus didn’t give the people of that time or this one a pass to be prodigal. We still have the responsibility to be stewards of our blessings, just as the Israelites had to work their new land to enjoy its bounty.  The prodigal son would also have to maintain his righteousness to keep what his Father gave him.

Many among us seem to be working hard to give the Prodigal Son story a tragic ending. The original ended with the wayward boy repenting. Is that boy who represents all of us falling victim to himself again? Are we squandering the gift of forgiveness Christ won for us? Our Author handed us the rights to the rest of that story.

Jesus saved us by sweating his blood for us. Now here’s a cool Paul Harvey commentary about the sweat equity required of us: