The Expiatory Church of the Holy Family, a large unfinished Roman Catholic church in Barcelona, Spain. (photo by Canaan – Own work)

As Easter Sunday approaches, many of us yearn for some of the dramatic miracles we read about in the scriptures. Our real problem is we tend to ignore the quiet miracles that happen to us every day—some that we help make happen. The simple act of forgiving someone can change their life miraculously. Jesus’ forgiveness of Peter’s denial led to the miracle of Christianity—just as Christ’s forgiveness of those who crucified him sealed the deal for all of us. From there, the combination of forgiveness and belief started the construction of a Church that is still being built today. Easter Sunday’s first reading offers Peter’s testimony to the strength of those two key building materials (Acts 10:34a, 37-43):

“To him all the prophets bear witness, that everyone who believes in him will receive forgiveness of sins through his name.”

Forgiveness and belief form the foundation of Christianity, the cornerstone of which is Christ himself. His own conviction that he was God’s son as he started his earthly ministry led to a contagion of that belief after his crucifixion and resurrection. Between those two events was the forgiveness he gave to those who made this all possible and necessary. Even after his ascension Jesus used the power of forgiveness to channel a key power source for the enlightenment of His developing church: Paul of Tarsus, who, by Christ’s forgiveness from beyond earth’s boundaries, was converted from persecutor to preacher, as we hear in Sunday’s second reading from his letter to the Colossians (Col 3:1-4):

Think of what is above, not of what is on earth. For you have died, and your life is hidden with Christ in God. When Christ your life appears, then you too will appear with him in glory.

Christ’s never-ending source of forgiveness is the cement that binds together the bricks of His constantly growing church. Our souls are the bricks, and the more we forgive from our heart, the more souls are bound together in a construction project without end—much like Antoni Gaudí‘s Sagrada Família in Barcelona, a physical brick-and-mortar church that has been under construction since 1882. 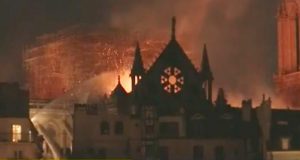 But if you really want to talk about miracles, we should think of those that rise out of the rubble of human weakness. Let’s think and pray about what happened this week in Paris to Notre Dame Cathedral. While more than 1,000 people were celebrating Mass inside the Cathedral, fire was spreading in the space 100 feet above them, burning the centuries-old framing supporting the Cathedral’s metal roof. Those souls got out of this alive, but much damage was left behind. What lies ahead is years of reconstruction. But the miracle of Notre Dame is that amidst the burning wreckage, many human souls worked together to save some of our faith’s most cherished relics—including what our Church believes to be the crown of thorns Jesus wore as he forgave those who placed it on his head before nailing him to the cross.

Many have pledged support to finance Notre Dame Cathedral’s reconstruction, but let’s also remember the continuous construction of Barcelona’s Sacred Family Cathedral which serves as a model for our immortal souls. It’s forgiveness among our human family that keeps our spiritual reconstruction going, making a sacred home out of what started more than 2,000 years ago at the site of a tomb. The beginning of that belief reconstruction project is recalled in Easter Sunday’s gospel reading, when some of Jesus’ builders did a site inspection (Jn 20:1-9):

Then the other disciple also went in, the one who had arrived at the tomb first, and he saw and believed. For they did not yet understand the Scripture that he had to rise from the dead.

From that site rose an indestructible Church with many chapels but a common cornerstone.