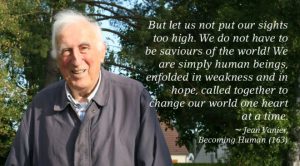 Jean Vanier, inspiration for communities built on faith and light.

When some of us think about religion, laws and regulations can intrude—making it easier to lose faith than gain it. Gaining faith is simplicity itself. It’s why Jesus loved children so much—because they don’t burden themselves with legalistic baggage. The children of his time saw he was the same way as they, and they approached him free in spirit. Matthew’s gospel tells of the time when Jesus’ disciples tried to shoo children away from their Master (Matthew 19:13-15):

Then children were brought to him that he might lay his hands on them and pray. The disciples rebuked them, but Jesus said, “Let the children come to me, and do not prevent them; for the kingdom of heaven belongs to such as these.”

Jesus never did things the way the religious of the world expected him to. People expected their Savior to come as a conquering hero, not as a humble servant riding into town on a donkey. But as the readings for the sixth Sunday of Easter tell us, the world’s expectations are a poor benchmark by which to judge God’s peace. Jesus speaks to us from John’s gospel (Jn 14:23-29):

Peace I leave with you; my peace I give to you. Not as the world gives do I give it to you. Do not let your hearts be troubled or afraid.

But it has never taken much to make people troubled or afraid, especially those people who try to complicate the word of God. When, as this Sunday’s first reading from Acts tells us (Acts 15:1-2, 22-29), Christ’s disciples went about spreading his message after their Master’s ascension, some started adding their own spin—and therefore, confusing people—especially those people schooled in the Jewish traditions passed down from Moses. Word of this got back to the original 12 disciples and they had to calm people with the simplicity of Christianity, meaning: avoid false idols, respect the dignity of life and respect the dignity of the Holy Spirit in each other.

“It is the decision of the Holy Spirit and of us not to place on you any burden beyond these necessities, namely, to abstain from meat sacrificed to idols, from blood, from meats of strangled animals, and from unlawful marriage. If you keep free of these, you will be doing what is right.”

The Holy Spirit doesn’t rely on the laws of men to free them of defilement. Kosher laws were based on defilement from exterior sources, but Christ taught that what defiles comes from the darkness of one’s own soul. Salvation from that darkness comes from the light of the Spirit, which seeks a home within us, as this Sunday’s reading from Revelation tells us (Rev 21:10-14, 22-23). John likens that light to the one that came out of Jerusalem when Christ was born:

The angel took me in spirit to a great, high mountain and showed me the holy city Jerusalem coming down out of heaven from God. It gleamed with the splendor of God. … I saw no temple in the city for its temple is the Lord God almighty and the Lamb. The city had no need of sun or moon to shine on it, for the glory of God gave it light, and its lamp was the Lamb.

That simple and pure light powers our faith. It needs no words. It comes from the truth of God’s image, which we were made to reflect. Just as Jesus saw it in the children who surrounded him, we can see it in the children surrounding us—many of whom we tend to ignore. That’s especially true of children with physical disabilities. Those disabilities tend to mask their spiritual abilities, making them invisible to us. Only through our faith can we see their light. 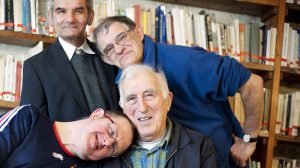 That’s the basis of the Faith & Light communities that have sprung up around the world. These groups of people dedicated to nurturing the faith of people with “disabilities” can be traced to the inability of a French couple to take their two disabled sons out in public to share a meal with them in a restaurant—or even to spend time with other people of faith in their own church. So they turned to a man of faith named Jean Vanier. He was inspired to establish pilgrimages to Lourdes for such families. Father Jim O’Donnell, an American priest, befriended Vanier and became the first National Chaplain for the Faith and Light organization Vanier founded. During his first pilgrimage in 1971, O’Donnell witnessed how faith and light unmask the spiritual abilities of the disabled. He recalls:

“One of the most powerful memories I have of that time is being in the shopping area of Lourdes, and watching these two mothers, one from France and one from England, with their two boys who had Down Syndrome, and the two boys were talking with each other with great enthusiasm, and I watched this. Neither mother knew what the other was saying because neither mother could understand the other’s language, but the two boys in front of them were communicating without knowing the other’s language. For me, it was a little miracle of Faith and Light in Lourdes.”

Jean Vanier passed away earlier this month, but his faith and light live on via thousands of such exchanges of faith and light among similarly simple souls transmitting the love of God around the world.