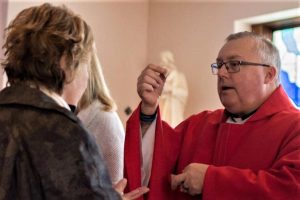 John Mullee, the pastor of St. Michael’s parish in Independence, recently told its “Brothers in Christ” men’s fellowship of his formation as a priest. He came to the priesthood relatively late in life, he explained, after years working in industrial consulting. That occupation left his soul feeling empty and hungering for something with more permanence. The dregs of his soul were reached when, during a series of industrial projects, his clients started referring to their workers using the same terminology by which they measured productivity—as “full time equivalents.” Industrial cultures that view flesh and blood people through such artificial lenses are doomed to lose sight of the original mission their founders envisioned.

Mullee found the fulfilling culture he craved in the Catholic Church. He cites role models like chaplains who support the faith of people serving in the Armed Forces and missionaries who devote their lives to feeding the spiritual and corporeal needs of the poor in places like El Salvador—even at the cost of their own lives. He mentioned the nuns who in 1980 were raped and murdered by five members of the El Salvador National Guard: Maryknoll Sisters Maura Clarke and Ita Ford, Ursuline Sister Dorothy Kazel, and laymissionary Jean Donovan. They had their chance to escape the region with their lives, but the people they served became family members they could never desert. Such people are examples of the royal blood line we recognize this Sunday via the Solemnity of the most holy body and blood of Christ. This liturgy traces our Christian culture back to the roots of Christ’s royal priesthood—the one that recognizes Jesus’ dual role as both King and servant.

The first reading is short, and doesn’t make a lot of sense without the context from which it’s taken (Gn 14:18-20). Melchizedek, King and Priest of Salem (what we now know as Jerusalem), breaks out bread and wine to celebrate Abram’s victory over several warrior Kings who had kidnapped Abram’s son Lot. This victory was also important to Melchizedek because it removed a source of regional conflict among earthly Kings and showed Abram to be the deliverer of the will of God. Melchizedek represents the royal and eternal line of King/Priest from which Jesus descended.

… being a priest of God Most High, [Melchizedek] blessed Abram with these words: “Blessed be Abram by God Most High, the creator of heaven and earth; and blessed be God Most High, who delivered your foes into your hand.” Then Abram gave him a tenth of everything.

This culture of tithing continues to this day to support the Church’s ministry and works of mercy. That includes the physical and spiritual nutrition symbolized by the Eucharist administered by Christ’s followers. The gospel reading for the solemnity of the body and blood of Christ demonstrates how the people he selected to continue his ministry would grow the church from a culture of servicing body and soul (Lk 9:11b-17). Their Master was the source of supply and they would become part of a perpetual distribution channel.

Luke tells us that after Jesus taught a crowd of 5,000 about the Kingdom of God, his disciples suggested Jesus dismiss the crowd so they could go somewhere to feed themselves.

[Jesus] said to them, “Give them some food yourselves.” They replied, “Five loaves and two fish are all we have, unless we ourselves go and buy food for all these people.” Now the men there numbered about five thousand. Then he said to his disciples, “Have them sit down in groups of about fifty.” They did so and made them all sit down. Then taking the five loaves and the two fish, and looking up to heaven, he said the blessing over them, broke them, and gave them to the disciples to set before the crowd. They all ate and were satisfied. And when the leftover fragments were picked up, they filled twelve wicker baskets.

Further into their ministry, Paul would join their perpetual distribution network, and as our second reading from his first letter to the Corinthians (1 Cor 11:23-26) tells us, that priesthood will keep Christ’s lineage alive until he comes again.

Brothers and sisters: I received from the Lord what I also handed on to you, that the Lord Jesus, on the night he was handed over, took bread, and, after he had given thanks, broke it and said, “This is my body that is for you. Do this in remembrance of me.” In the same way also the cup, after supper, saying, “This cup is the new covenant in my blood. Do this, as often as you drink it, in remembrance of me.” For as often as you eat this bread and drink the cup, you proclaim the death of the Lord until he comes.”

Today Christ’s royal priesthood lives on as custodians like John Mullee help keep the Kingdom of God productive and alive within us.