Hollywood has done good things with grand moments from the Old and New Testaments. When you think of “The Ten Commandments” in Hollywood terms you may think of Cecil B. DeMille directing Charlton Heston’s Moses to lead a cast of thousands to freedom across the desert and the Red Sea. The Old and New Testament passages we read in this Sunday’s mass may not seem to lend themselves to such dramatic treatment. In the first reading from Nehemiah (Neh 8:2-4a, 5-6, 8-10) we have Ezra, a priest, reading God’s laws to a vast congregation of former captives who seem to be afflicted with guilt for going astray from these laws. Who would you cast for the following scene?

“Ezra the priest brought the law before the assembly, which consisted of men, women, and those children old enough to understand. Standing at one end of the open place that was before the Water Gate, he read out of the book from daybreak till midday. … ‘Today is holy to the LORD your God,’ Ezra said. ‘Do not be sad, and do not weep”—for all the people were weeping as they heard the words of the law.’”

Tough one. What’s grand and exciting about someone reading to a weepy crowd all day? Neither Cecil B. DeMille nor Charlton Heston would have bothered bringing this scene to life. It is more about the power of the Holy Spirit than the fury of a vengeful God. This might have been a better project for a director like Frank Capra and a star like Jimmy Stewart. 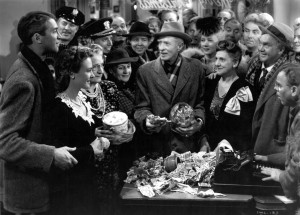 Capra was famous not only for making Jimmy Stewart famous, but for casting the hundreds of character actors who populated the crowd scenes in his movies. In Capra movies, crowds had a spirit about them. They had the collective power of a crowd but they also evoked individual spiritual qualities by the focus on their expressive faces. Capra’s movies are the closest Hollywood has come to illustrating what St. Paul must have had in mind in our second reading (1 Cor 12:12-30) where he tells the Corinthians about the nature of the Holy Spirit:

“Brothers and sisters: As a body is one though it has many parts, and all the parts of the body, though many, are one body, so also Christ. For in one Spirit we were all baptized into one body, whether Jews or Greeks, slaves or free persons, and we were all given to drink of one Spirit. … Now you are Christ’s body, and individually parts of it.”

You might have seen “It’s a Wonderful Life” this past Christmas. It features several classic Capra crowd scenes. The highlight is when Jimmy Stewart’s George Bailey is saved from financial ruin by a crowd of his customers and friends who collectively contribute to the salvation of his “wonderful old building and loan.” The camera pans across a sea of faces, each representing an individual with his or her own stake in Stewart and his company and with a different trade supported by it. Capra’s crowd embodies a variety of separate skills and desires that, gathered in one body and soul, accomplishes George’s salvation—and their own, as well.

Our Sunday readings conclude with the opening of Luke’s gospel (Lk 1:1-4; 4:14-21) in which he sets the table for detailing the power of his Master. It lay in Christ’s ability to fill anyone and everyone with the Holy Spirit whenever he speaks to them. Luke testifies to this power:

“I too have decided, after investigating everything accurately anew, to write it down in an orderly sequence for you, most excellent Theophilus, so that you may realize the certainty of the teachings you have received. Jesus returned to Galilee in the power of the Spirit, and news of him spread throughout the whole region. He taught in their synagogues and was praised by all.”

Jesus created miracles with his words and changed the collective spirit of many crowds. The scriptures report the reaction of these crowds but we are left to speculate what the individuals from these crowds did when they got home. Some may simply have changed how they raised their families, but others were moved to spread the Master’s teachings to other crowds around the world.

I wonder who our Director will get to populate the crowd for his Grand Finale. I hear it’s the role of a lifetime.