In the wild, wild Middle East that was the Jerusalem of Jesus’ time, his disciples sometimes had to depend on the mercy of their quarry to successfully spread the gospel. Our gospel reading this Sunday (Lk 10:1-12, 17-20) indicates how dangerous this mission was and how courageous the disciples were to take it on. To be effective, they couldn’t just spout their master’s words, they had to demonstrate the art of living them. This required living with the people they wanted to reach, which carried all the dangers the pioneers of the American West faced when establishing their new frontier.

“I am sending you like lambs among wolves,” Jesus told them. “Carry no money bag, no sack, no sandals; and greet no one along the way. Into whatever house you enter, first say, ‘Peace to this household.’ … Stay in the same house and eat and drink what is offered to you, for the laborer deserves his payment. Do not move about from one house to another. Whatever town you enter and they welcome you, eat what is set before you, cure the sick in it and say to them, ‘The kingdom of God is at hand for you.’ Whatever town you enter and they do not receive you, go out into the streets and say, ‘The dust of your town that clings to our feet, even that we shake off against you.’”

Such dust-ups between believers and non-believers are still common in these “civilized” times, and equally dramatic. For example, when Christian author Larry Taunton stepped on Atheist Christopher Hitchens’ turf in a series of debates a few years ago, it formed the basis for the book I told you about a few blogs ago. In The Faith of Christopher Hitchens, Taunton describes himself entering a situation similar to that of the above gospel reading. He spent a stretch of one-to-one time with Hitchens, traveling between various sites discussing the gospel of John. During that time these two men learned more about the people beneath each other’s reputations and came to respect each other more. Hitchens saw that Taunton wasn’t just a hired gun who made a living by debating heathens. He saw a believer who lived the gospel with all his heart—a quality Hitchens didn’t always see in other philosophical opponents. 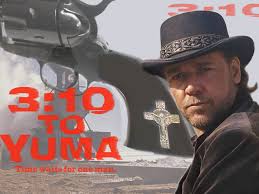 At one point in his book, Taunton recalls how this relationship actually played out like the plot of a great western movie, 3:10 to Yuma, in which a good man struggling to support his family tries to earn the bounty placed on the head of Ben Wade, a notorious gunslinger he captured. The only problem is, he must get this criminal to a train that will transport the gunslinger to justice. The gunslinger’s henchmen stand between them and the train. During that ambush-filled journey to the station, the outlaw learns more about his captor and his family and soon feels a desire for the peace their love and values have brought them. Eventually he actually helps this man get him to the station—and to his own fate. The familiarity that grew between the two actually bred a kinship.

Taunton makes the connection between his complex relationship with Hitchens and the one portrayed in 3:10 to Yuma in a chapter he named after the film. A highlight of this chapter takes place at a Hitchens book-signing following one of the public debates he had with Taunton. During the debate, Hitchens tells the debate audience of that multi-day road trip he took with his debate opponent through the lovely Shenandoah Valley. During the post-debate signing, as a devout atheist and devoted Hitchens fan walks up to his hero for a signature, he disdainfully asks the author why he would ever share such a long journey with a Christian.

“Because he is my friend, and you, sir, are an idiot,” Hitchens shot back. “Ben Wade. Bang. Bang.” (Taunton’s wordplay.)

Taunton and other Christian evangelists perform a role similar to that of the disciples in this Sunday’s gospel reading—spending time with people foreign to their philosophy and slowly winning them over. In the end, Hitchens may not have bought what Taunton was selling, but he admired the effect it had on his friend—one of peace. Hitchens’ Godless belief system did not bring him such comfort, nor did he find peace in the vices of nicotine or alcohol to which he was enslaved. In Sunday’s first reading (Is 66:10-14c) the prophet Isaiah addresses future generations of Ben Wades and Christopher Hitchens, giving voice to the divine philosophy that was planted and cultivated in the Wild, Wild Middle East:

As nurslings, you shall be carried in her arms, and fondled in her lap; as a mother comforts her child, so will I comfort you; in Jerusalem you shall find your comfort.

St. Paul takes that message of comfort further in our second reading (Gal 6:14-18), assuring the Wades and Hitchens among us that just as the lawless can never achieve such peace, neither will the laws or customs of man deliver it.

For neither does circumcision mean anything, nor does uncircumcision, but only a new creation. Peace and mercy be to all who follow this rule and to the Israel of God. From now on, let no one make troubles for me; for I bear the marks of Jesus on my body.