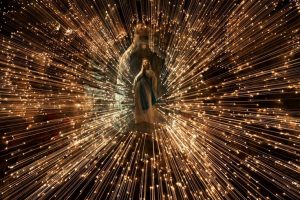 Watching the movie “The Song of Bernadette” the other night made me think of Christmas tree lights—the old annoying series-wired kind.  A string of these lights goes dark when one bulb goes bad. But using the glass-half-full perspective, you could say an entire string will light up if a good bulb is added. Bernadette Soubirous was a good bulb. 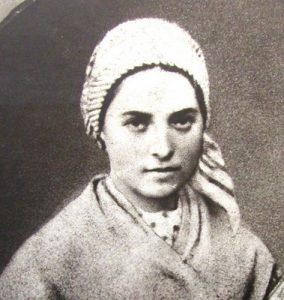 In 1858, this poor, sickly little girl from the French town of Lourdes tapped into the source of light for all humanity: the Immaculate Conception. That’s how the lady who appeared to Bernadette identified herself. Although this child was the only one who saw the Lady, many others were brought to faith by witnessing the formation of her faith during these events. For many outside Lourdes, the collective light of faith shining from this little town in southern France became like a perpetual beacon that still attracts miracle-hungry pilgrims from around the world.

Nevertheless, to many politicians and church officials of her time, Bernadette was a source of darkness. If they couldn’t tap into her faith generator, they reasoned, how could others? In fact, why should others? Better everyone should stay in the comfort of familiar darkness than challenge humanity’s understanding of the way things really are.

But Bernadette’s is a Christmas story, with all the promise of glad tidings of great joy for all people. She became one of the sentinels Isaiah spoke of in this Christmas day’s first reading (Is 52:7-10):

Hark! Your sentinels raise a cry, together they shout for joy, for they see directly, before their eyes, the LORD restoring Zion. … all the ends of the earth will behold the salvation of our God.

Faith restoration was the fruit of the Immaculate Conception. As a latter-day sentinel, Bernadette was not unlike the early-day sentinels—shepherds abiding in the field—who witnessed Mary and the birth of our savior firsthand. The gospel of the Christmas mass at dawn gives the account of the light they reflected from their vision (Lk 2:15-20):

So they went in haste and found Mary and Joseph, and the infant lying in the manger. When they saw this, they made known the message that had been told them about this child. All who heard it were amazed by what had been told them by the shepherds. And Mary kept all these things, reflecting on them in her heart.

Centuries later, it is believed, Mary would open the treasure of her heart to Bernadette so the perpetual light shining from it could be shared with the faithful of the modern world. Of course, the darker side of our nature will say, “The Song of Bernadette” is Hollywood at the height of its schmaltzy period. Such critics are examples of those among us without faith, for whom Bernadette’s song says no proof is sufficient. For those of us with faith, no proof is necessary—because we will always have the words of Mary’s son to sustain us.

These words were powerful enough to bring light to Paul’s dark heart. In his letter to the Hebrews which is shared during the Christmas day mass, Paul gives us a short history of heavenly communication with the earthbound (Heb 1:1-6):

In times past, God spoke in partial and various ways to our ancestors through the prophets; in these last days, he has spoken to us through the Son, whom he made heir of all things and through whom he created the universe, who is the refulgence of his glory, the very imprint of his being, and who sustains all things by his mighty word.

So, yes, the ancient lights of Christmas still shine, although occasional faith burnouts among us threaten complete coverage of humanity’s family tree. But all it takes to get a string going again is a fresh new reflection of the Son from innocents like Bernadette. Her muscular belief in the truth radiating from her heart is still strong enough to make irrelevant the weak, sterile, cold light of any proof mined from man’s mind.