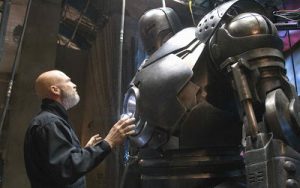 Last week’s inauguration was designed to help Donald Trump accept an oversized hand-me-down mantle of leadership that he’ll have to grow into—just as each of its previous owners did. The ceremonies began with a series of prayers for the success of this undertaking. One of them was taken from the gospel of Matthew (Mt 5:1-12a), which happens to be the gospel reading for this Sunday’s Mass. It contains Christ’s Sermon on the Mount. Some of the beatitudes Jesus detailed for his listeners are ideal for helping new leaders take on the awesome responsibility of power with a bit of grace:

The ability to grow into leadership’s armor requires both ego and humility, the latter of which even Trump would admit he doesn’t always exemplify. However, the longer he occupies this office, the more likely he will continually be humbled by the great responsibilities that came with it. Sunday’s other readings offer good accessories for President Trump—and all leaders with oversized egos—to try on for size. They are lessons in humility.

During the campaign leading up to the election, both candidates mingled with thousands of followers from humble backgrounds of all kinds. These people looked to their candidates for direction to a better future. Chances are this constant exposure to people of humble means started the growth process Donald Trump will need to make the presidency a better fit for him. He would do well to read what Paul told the Corinthians (Sunday’s second reading) about the poor in spirit who make up such a large portion of the governed (1 Cor 1:26-31):

Rather than be shamed by the people they lead, though, anyone in power wishing to grow more gracefully into their role should remember why God loves humility so much. Sunday’s first reading from Zephaniah (Zep 2:3; 3:12-13) is a good reminder of their responsibility as reflected in the leaders of an earlier age:

I will leave as a remnant in your midst a people humble and lowly, who shall take refuge in the name of the LORD: the remnant of Israel. They shall do no wrong and speak no lies; nor shall there be found in their mouths a deceitful tongue; they shall pasture and couch their flocks with none to disturb them.

Whether he realized it or not, President Trump’s Inaugural address contained elements of leadership reminiscent of Zephaniah’s prophecy:

“We must speak our minds openly, debate our disagreements honestly, but always pursue solidarity … There should be no fear. We are protected and will always be protected. … And most importantly, we will be protected by God.”

Let’s pray our new president leads us all by growing into this wisdom.