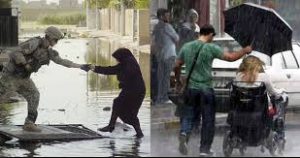 Fox News commentator Bill O’Reilly recently recounted asking a little kid celebrating Mardi Gras in New Orleans what he was giving up for Lent. The child said “nothing.” Instead, the kid added, he plans to do one act of random kindness for each of the 40 days of Lent before Easter Sunday. O’Reilly concluded his commentary noting that if we all did just 40 acts of kindness like this little child in the next six weeks it would make a huge difference in the world.

He’s right. Such an expansion of good will could be transformational for society. It’s ironic that this kid made his Lenten resolution during Mardi Gras—a day when grown-ups transform themselves to hide who they are. This child chose to reveal his character! So it is fitting that this weekend’s mass readings for the second Sunday of Lent deal with examples of transforming out of our mortal disguises to reveal our divine origins.

Our first reading goes all the way back to Genesis (Gn 12:1-4a) to reveal God’s calling to spread His transformational grace:

“I will make of you a great nation, and I will bless you; I will make your name great, so that you will be a blessing. … All the communities of the earth shall find blessing in you.”

If that little kid lives up to his Lenten resolution, he will be a blessing to at least 40 people. What he’s doing is not new—just unusual in this day when blessings are more sought than spread. He is living up to the exhortation Paul makes to us through his letter to Timothy (2 Tm 1:8b-10): Be holy as Christ is holy!

He saved us and called us to a holy life, not according to our works but according to his own design and the grace bestowed on us in Christ Jesus before time began, but now made manifest through the appearance of our savior Christ Jesus, who destroyed death and brought life and immortality to light through the gospel.

We are called to reveal our divine origins to each other as Christ did for Peter, James and John in his transfiguration, described in Sunday’s gospel reading (Mt 17:1-9):

His face shone like the sun and his clothes became white as light. And behold, Moses and Elijah appeared to them, conversing with him. … a bright cloud cast a shadow over them, then from the cloud came a voice that said, “This is my beloved Son, with whom I am well pleased; listen to him.”

Amidst the adult celebration of self-love disguised as happiness this past Mardi Gras, a child revealed the transformative joy of divine love as he resolved to give his goodness up to God by giving it out to others.