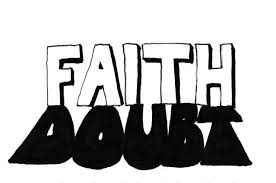 Jesus performed many miracles during his public life, but if all it took was a miracle to change people’s hearts, he wouldn’t have had to die. In fact, I wonder if Jesus sometimes worried that his miracles were becoming mere distractions for those closest to him. Imagine all the amazing things his disciples witnessed. And yet, on the holy day of the Ascension, we hear this in our gospel passage from Matthew (Mt 28:16-20):

The eleven disciples went to Galilee, to the mountain to which Jesus had ordered them. When they saw him, they worshiped, but they doubted.

They doubted, even after what is reported about Jesus in Acts, which is excerpted for the Ascension mass’s first reading (Acts 1:1-11):

He presented himself alive to them by many proofs after he had suffered, appearing to them during forty days and speaking about the kingdom of God. …

According to the same passage, during one of those appearances he told them this:

“But you will receive power when the Holy Spirit comes upon you, and you will be my witnesses in Jerusalem, throughout Judea and Samaria, and to the ends of the earth.”

Then, he treats them to another miraculous sight;

When he had said this, as they were looking on, he was lifted up, and a cloud took him from their sight. While they were looking intently at the sky as he was going, suddenly two men dressed in white garments stood beside them. They said, “Men of Galilee, why are you standing there looking at the sky?”

This sounds like Jesus’ way of telling them, “Stop gawking and get to work!”

These were men of faith! Of course doubt and faith go hand in hand. To people without faith, though, Christ’s miracles were no more than magic tricks—made possible, many might suspect, by distractions. “Look at this hand, not that one.”  For people of faith, the true miracle is what happens inside them: a transformation into children of God. That was the miracle of Christ’s life, facilitated by his death and resurrection. Without it, Christ would have simply been seen as history’s greatest magician. What separated Christ’s miracles from magic tricks was what happened at Pentecost, when his disciples were turned inside-out—exposing their very souls for all to witness. Later on, Paul’s would be seen as the greatest of these transformations, changing him from a killer to a savior. In his letter to the Ephesians (Eph 1:17-23), he prays to God on their behalf for the same miracle that transformed him:

May the God of our Lord Jesus Christ, the Father of glory, give you a Spirit of wisdom and revelation resulting in knowledge of him. May the eyes of your hearts be enlightened, that you may know what is the hope that belongs to his call, what are the riches of glory in his inheritance among the holy ones, and what is the surpassing greatness of his power for us who believe.

There’s nothing magical in that power of belief, but it is truly miraculous, considering the rawest of raw materials into which its spirit is breathed and knowing the toxicity of the earthly environments many of us look to for shelter today. Many of modern society’s “safe havens” require a denunciation of that miracle to enjoy their perceived benefits. The illusion that such traps are benefits is the real magic trick designed to distract us from the miracle that Jesus Christ is still alive and well in the tabernacle of believers’ hearts.