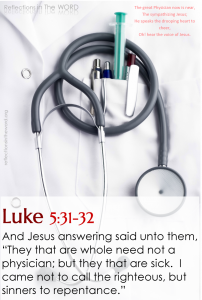 The Catholic Church has designated many saints as “doctors” of the church for their defense of our faith, but Jesus—the founder of this faith–set the standard for healing those whose faith was broken.  The gospels are written by the interns whom Jesus took on his healing rounds. One of them—Matthew—started out as one of the patients, and his healing turned into a case study reported not only by himself, but his colleagues Mark and Luke.

Although in their gospels Matthew’s colleagues honored his anonymity by using his given name of Levi so the person he became would not be associated with his tax-collecting past, this patient was not shy about making his own healing part of his gospel. His transformation began with Jesus’ invitation to follow him. This is how his internship began, and to celebrate, he invited Jesus to a party at his house to which Matthew also invited other tax collectors and sinners in need of healing. Mark and Luke’s account of this event are similar to Matthew’s (Matthew 9:12):

The Pharisees saw this and said to his disciples, “Why does your teacher eat with tax collectors and sinners?” He heard this and said, “Those who are well do not need a physician, but the sick do.

The start of Jesus’ rounds with his interns sets the table for this Sunday’s readings, all of which represent the spirit of the physician’s Hippocratic Oath. A key provision of this promise: Into whatsoever houses I enter, I will enter to help the sick. That means anybody and everybody who is sick, Jew and Gentile. In basing his ministry on this practice, Jesus was following his Father’s directive. Our first reading from Isaiah (Is 56:1, 6-7) offers the Oath God the Father established:

The foreigners who join themselves to the LORD, ministering to him, loving the name of the LORD, and becoming his servants— all who keep the Sabbath free from profanation and hold to my covenant, them I will bring to my holy mountain and make joyful in my house of prayer; their burnt offerings and sacrifices will be acceptable on my altar, for my house shall be called a house of prayer for all peoples.

On its surface, Sunday’s gospel reading from Matthew (Mt 15:21-28) seems to show Jesus breaking that oath, refusing the prayer for healing offered up by a Canaanite woman, but Jesus turns his encounter with this mother of an afflicted girl  into an invaluable lesson for his interns—who were quick to urge their teacher to bypass this case.

“Have pity on me, Lord, Son of David!,” the woman begged.

“I was sent only to the lost sheep of the house of Israel,” Jesus answers. … “It is not right to take the food of the children and throw it to the dogs.”

Then, this woman, in keeping with the spirit of Jesus’ own parable of the persistent widow whose constant prayers are finally answered, persists:

“Please, Lord, for even the dogs eat the scraps that fall from the table of their masters.”

This fit perfectly into Jesus lesson plan for his interns who were so eager to bypass this needy patient. It allowed him to show them that his practice was open to anyone blessed by the Holy Spirit with the gift of faith.

“O woman, great is your faith! Let it be done for you as you wish.” And the woman’s daughter was healed from that hour.

Years later, disciple Paul—a patient Jesus healed after he himself defeated mortality—applied that lesson of the universality of faith in a letter to the Romans (Rom 11:13-15, 29-32), explaining why he was opening his practice to all comers:

I am speaking to you Gentiles. Inasmuch as I am the apostle to the Gentiles, I glory in my ministry in order to make my race jealous and thus save some of them. For if their rejection is the reconciliation of the world, what will their acceptance be but life from the dead? For the gifts and the call of God are irrevocable.

That means once healed, you are healthy forever. The only payment required is a single installment of faith.