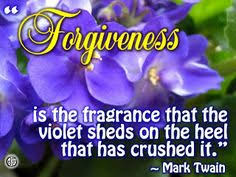 Most secular humanists believe that human life lacks a cosmic meaning—and they are okay with that. In fact, they find it liberating.  They embrace the void. It relieves them of worrying about an afterlife—and struggling with the faith to believe in it. A lack of faith in any kind of divine essence linked to human nature makes it easy, for example, to hold grudges with impunity. Forgiveness is hard. After all, as the noted Catholic poet Alexander Pope wrote, “To err is human, to forgive divine.” Some find the strength to forgive and attribute it to their moral code. Could that just be a rose by another name that smells just as sweet?

Mark Twain, who was critical of many aspects of religion, is credited with a moving quote he ascribed to an asylum inmate: “Forgiveness is the fragrance the violet sheds on the heel that has crushed it.” Maybe that fragrance is our divine essence. Christians are called to live by the code established by the one who was tortured and murdered for his teachings, yet with his dying breath, forgave his persecutors.  The prophet Isaiah described the role of the servant of the Lord, whom Christians would later recognize as Jesus (IS 53:5):

He was crushed for our iniquity. He bore the punishment that makes us whole, by his wounds we were healed.

In this Sunday’s second reading (Rom 14:7-9), Paul seems to argue against the secular humanist’s worship of a void and the permission some take from it to act with abandon since we’re destined to die anyway…

Brothers and sisters: None of us lives for oneself, and no one dies for oneself. … For this is why Christ died and came to life, that he might be Lord of both the dead and the living.

Holding grudges and withholding forgiveness implies that the void some non-believers embrace is within them. It’s the space God originally designed as his home. Sirach says when wrath and anger fill that space, there’s no room for God. In a practical sense, he makes the point in this Sunday’s first reading that, where anger is concerned, one gets as good as one gives—or to put it in a secular humanist’s terminology, what goes around comes around (Sir 27:30—28:7).

Could anyone nourish anger against another and expect healing from the LORD? Could anyone refuse mercy to another like himself, can he seek pardon for his own sins? If one who is but flesh cherishes wrath, who will forgive his sins?

Anger is one of man’s greatest weaknesses, but the divine ability to forgive others must also help us learn to forgive ourselves. That’s a skill Christ’s right-hand man, Peter, had to learn after denying any connection to his master once Jesus was captured and prosecuted. Before that rough time in his life, as Sunday’s gospel reading shows us, Peter asked his teacher a question that might have helped him cope with his later self (Mt 18:21-35):

“Lord, if my brother sins against me, how often must I forgive? As many as seven times?” Jesus answered, “I say to you, not seven times but seventy-seven times.

That was a tough lesson for Peter, as it is for any human governed by passions and a shadow of a doubt in the divine. We can all thank Peter for embarrassing himself several times so that we might witness the forgiveness his master granted each time. But that embarrassment is also a divine gift that sets humans apart from all other mortal creatures. Just as Mark Twain beautifully described forgiveness as something that survives our mortality, he also described another human trait that separates humans from animals: We’re the only ones who blush—or have a reason to.