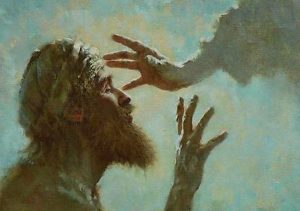 Many Christians can relate to the lepers in this Sunday’s mass readings. To be a leper in biblical contexts was akin to being an outcast, body and soul. After Christianity splintered into a wide variety of beliefs, certain elements of faith made some believers unpopular among their brethren—to the point of ineligibility for public office or even for private friendship. And in countries where the practice of any religion is grounds for arrest or even death, faithful believers are still adding names to their roster of martyrs. To this day, dictators of some countries insist on keeping track of religious citizens, equating any kind of faith in God with leprosy—treatable in the undignified way it was in the Old Testament reading we share this Sunday (Lv 13:1-2, 44-46):

“The one who bears the sore of leprosy shall keep his garments rent and his head bare, and shall muffle his beard; he shall cry out, ‘Unclean, unclean!’ As long as the sore is on him he shall declare himself unclean, since he is in fact unclean. He shall dwell apart, making his abode outside the camp.”

Leprosy as a disease has lost a good deal of its presence and its power to ostracize, except in the poor regions of India where there are still infected people who are considered Untouchables. In most other parts of the world the disease has largely been eradicated. But being untouchable as a human condition is still alive and unwell in schools, politics and on social media. It takes courage to remain faithful in such environments. St. Paul instructed the faithful leaders among his followers via various letters on how to represent their church so they could touch the hearts of those who considered them untouchable. This excerpt addressed to the Corinthians comes from Sunday’s second reading (1 Cor 10:31—11:1):

Brothers and sisters, whether you eat or drink, or whatever you do, do everything for the glory of God. Avoid giving offense, whether to the Jews or Greeks or the church of God, just as I try to please everyone in every way, not seeking my own benefit but that of the many, that they may be saved. Be imitators of me, as I am of Christ.

Jesus taught his disciples to set fires to hearts in order to burn out the viral evils plaguing mankind. You can bet the leper he cured in Sunday’s gospel reading from Mark spread the fire to his family and his community’s leaders. The fires inside all of those touched by Christ and his disciples became a global conflagration that both purified souls and divided some families. Elsewhere in Mark (MK 10:34) Jesus says “Do not think that I have come to bring peace upon the earth. I have come to bring not peace but the sword.” His sword would sever the saved from earthly loyalties and carve a stairway to help us reach the lofty ideals for which humanity was created. Like the leper from Sunday’s gospel reading (Mk 1:40-45), our desire for such purification moves God’s heart.

“If you wish, you can make me clean,” the leper told Jesus. “Moved with pity, he stretched out his hand, touched him, and said to him, “I do will it. Be made clean.” The leprosy left him immediately, and he was made clean. Then, warning him sternly, he dismissed him at once.”

Jesus instructed him not to tell anyone how he was saved, but that was like telling him not to think about pink elephants. He could do nothing else. That’s how we should think about our own salvation. Unceasingly. But whether humanity believes it’s been cured is the elephant in the room.