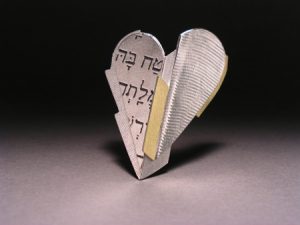 Whether or not you consider Noah’s Ark a fairy tale, it accomplishes what all great fairy tales do: it tells the truth.

This is a simple story of salvation from God, but the survival of those eight people on the ark wasn’t possible without considerable effort on their part. First they had to build that thing! Step two might have been finding a way to tolerate each other’s constant company while occupying that space for an extended period. Of course they loved each other, but they were human, and each of them could have had irritating quirks that became maddening faults once all of them were confined by limited space and limitless time. In that situation, God’s covenant of mutual love among these survivors would have been hard to live by toward the end of the voyage.  God’s share of the covenant’s simple terms are spelled out in this Sunday’s first reading (Gn 9:8-15):

I will recall the covenant I have made between me and you and all living beings, so that the waters shall never again become a flood to destroy all mortal beings.”

Amazingly, humans have managed not to destroy each other yet—even though we keep breaking our part of the first and its succeeding covenant with God. Through centuries of our wallowing in the kind of evil that would certainly qualify as deal breakers under most earthly contracts, our senior partner has yet to sue us for damages. That’s because he has significant skin in this agreement. His son’s. After this Jesus drew up and delivered a new, even simpler covenant for us, he signed it in his own blood and committed himself to ensuring that we would do our part. So during his earthly ministry he taught people who were at their depths, with no place else to go but up, as St. Peter tells us in our second reading (1 Pt 3:18-22):

[He] went to preach to the spirits in prison, who had once been disobedient while God patiently waited in the days of Noah during the building of the ark, in which a few persons, eight in all, were saved through water. This prefigured baptism, which saves you now. It is not a removal of dirt from the body but an appeal to God for a clear conscience, through the resurrection of Jesus Christ.

God patiently waited for humanity to do its part in the first covenant, and he’s still waiting for us to do that for the second. The baptism of water that marked the latter one started with John the Baptist, who lived and died to pave the way for the Christ, who would teach us the art of living God’s law. Our part in it is explained in this Sunday’s gospel reading (Mk 1:12-15):

After John had been arrested, Jesus came to Galilee proclaiming the gospel of God: “This is the time of fulfillment. The kingdom of God is at hand. Repent, and believe in the gospel.

For many of us such belief is harder to accomplish than building an ark and stocking it with two of every living creature. But is it really so hard? What does that gospel boil down to, anyway? Jesus told us this new covenant requires only two deliverables from us. We learn them via the gospel of Matthew when a scholar of the law asks Jesus which commandment in the law is the greatest.

The beauty of this simple contract is, if we work on fulfilling its second command, we’ll automatically accomplish the first. How much easier can our loving Father make it for us?