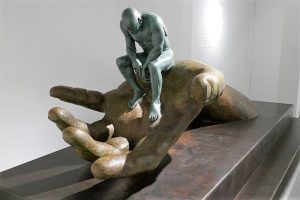 Fate: “The development of events outside a person’s control, regarded as predetermined by a supernatural power.”

It is our fate to be loved by that power we call God. He shows his love in strange ways. On Southwest Flight 1380 a few weeks ago—ironically enough, destined for Love Field in Dallas—fate caused the plane’s engine to explode, shrapnel to break one of the plane’s windows and for that event to kill passenger Jennifer Riordan. Her body was partially sucked out the window until fate also called two other passengers to risk their own lives by pulling her body back in and blocking the broken window so nobody else would be hurt.

While the fates of these passengers were in the hands of these gentlemen, the fates of all souls onboard were in the hands of the pilot—a non-flustered professional with faith in her own talents and in the love of her God. Tammie Jo Shults developed these strengths raising a family and starting her flying career in the Navy. After Shults safely landed this shaky and increasingly unflyable aircraft, one news account quoted her mother-in-law as crediting both her skills and her faith for that landing. She was confident that while Tammie was calmly talking to the controllers, she was also talking with God. Ultimately, she put herself and her passengers in His hands. One direct quote from Shults came from a text she sent a fellow pilot: “God is good.”

What are friends for?

Throughout all the gospels—especially this Sunday’s—that friendship is on display: friends putting themselves in each other’s hands while putting their fates in the hands of God. As Peter tells us in the first reading (Acts 10:25-26, 34-35, 44-48), He doesn’t play favorites:

“In truth, I see that God shows no partiality. Rather, in every nation whoever fears him and acts uprightly is acceptable to him.”

But, faithful to fate’s definition, the form of God’s love is out of our hands while we are in His. Why did He let poor Ms. Riordan perish? Did He not love her enough to save her? Our faith and our second reading from John (1 Jn 4:7-10) tell us she was both loved and saved.

“Everyone who loves is begotten by God and knows God. Whoever is without love does not know God, for God is love. In this way the love of God was revealed to us: God sent his only Son into the world so that we might have life through him. In this is love: not that we have loved God, but that he loved us and sent his Son as expiation for our sins.”

In our gospel reading, John quotes Jesus as broadening that definition of love by defining our fateful friendship with him (Jn 15:9-17):

“I have called you friends, because I have told you everything I have heard from my Father. It was not you who chose me, but I who chose you and appointed you to go and bear fruit that will remain, so that whatever you ask the Father in my name he may give you. This I command you: love one another.”

Every passenger of Flight 1380 left that aircraft obeying that command, because they just witnessed the effects of God’s friendship—which includes an invitation to a faith telling us that Jennifer Riordan is enjoying that friendship face-to-face.