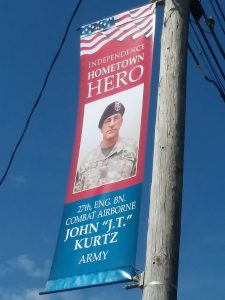 The light poles along our town’s main street are decorated with banners honoring many of the city’s veterans. One of them happens to be our next-door neighbor, a police officer who was greatly influenced to expand his service to the military due to the events of 9/11. We crossed paths the other morning as we started our days. “Good to see you, JT,” I said. “Better seen than viewed,” he responded with a smile. “You’re too young to be telling that funeral home joke,” I retorted. “Comes with the job,” he said.

He’s right. Sudden death is an occupational hazard for all cops and soldiers. Many cope with it by maintaining a dark sense of humor.

Having your face on a hero banner is nice, but is it worth living with death and sorrow every day? Young aspiring heroes looking up at those banners might think so, and so might old decorated veterans—but for different reasons. Many kids are like James and John, disciples of Jesus who, as this Sunday’s gospel reading tells us, are anxious to wave their banners in Jesus’ heroic light. They don’t realize the price Jesus is preparing to pay as they ask for seats of honor in his coming kingdom.

“You do not know what you are asking,” he tells them. “Can you drink the cup that I drink or be baptized with the baptism with which I am baptized?”

Like banner-waving kids, they’re blind to the horror behind the honor of service. Jesus tells his guys what every veteran learns on their way to earning their awards.

Veterans of many faiths dedicate themselves to serving their fellow humans—even those without religious faith. But whether they intend to or not, they join the ranks of brothers in Christ by living a faith made of works. In Sunday’s first reading, we can expand Isaiah’s prophesy of the coming Messiah’s mission to the lot of any good person who sees evil in the world and chooses to fight it.

The LORD was pleased to crush him in infirmity. If he gives his life as an offering for sin, he shall see his descendants in a long life, and the will of the LORD shall be accomplished through him.

When the faithful pray, God answers those prayers by using all humans as instruments of his will—Christians, Jews, Muslims and atheists. How else could miracles like D-Day and Hitler’s defeat have been accomplished? The people who accomplished those missions stared death in the face and many shook its hand. Though crushed by that encounter, individual weakness was turned into spiritual strength that delivered the free world from evil. Jesus faced his own death with the same mission-minded courage, as we read in this passage from Hebrews—Sunday’s second reading:

For we do not have a high priest who is unable to sympathize with our weaknesses, but one who has similarly been tested in every way, yet without sin.

Whether we all end up around God’s table in seats of honor is not for any of us to say. Those of us with faith are confident that nobody’s sins are powerful enough to defeat God’s will. As the Master himself told us, for his Father, all things are possible—including unorthodox seating arrangements.

* The title is from Song of Songs, Chapter 2, and also happens to be a darn good hymn. Listen: