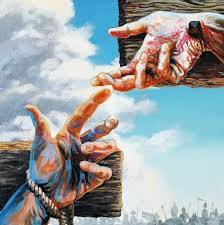 Even the most secular cultures worship idols. We’re passionate about celebrities and celebrity—as well as the accompanying wealth and fame. Most of us idolize from a distance, but if we get close enough for long enough, our idols sometimes lose their appeal. There’s some truth to the saying, “Familiarity breeds contempt.” It’s a human flaw. The Mass readings for Palm Sunday support that.

The passage we’ll read from Luke’s gospel (Lk 19:28-40) as the celebrant blesses the palms we hold up recalls Jesus’ heroic procession into Jerusalem. The people who have seen Jesus work miracles, and even those who have only heard about them, are giddy about the possibility that this is the Messiah who will free them from Roman captivity.

As [Jesus] rode along, the people were spreading their cloaks on the road; and now as he was approaching the slope of the Mount of Olives, the whole multitude of his disciples began to praise God aloud with joy for all the mighty deeds they had seen. They proclaimed: “Blessed is the king who comes in the name of the Lord.

Christ’s disciples are described as a multitude. Even in this age of mass media Celebrity Idolization, how well can a multitude get to know their idols? Just like those palm wavers 2,000 years ago, most can’t get close enough to form any kind of relationship. What they hear about and from their heroes can help solidify discipleship, however. Our first reading from Isaiah (Is 50:4-7) reminds us how Jesus and the prophets earned their exalted status:

The Lord GOD has given me a well-trained tongue, that I might know how to speak to the weary a word that will rouse them. Morning after morning he opens my ear that I may hear; and I have not rebelled, have not turned back.

But those among the throngs of disciples who did get close enough to see Jesus the man also noticed what Paul told the Philippians about him in our second reading (Phil 2:6-11):

He humbled himself, becoming obedient to the point of death, even death on a cross. Because of this, God greatly exalted him.

Luke’s account of Christ’s passion shows what happens when people get their own taste of being idolized. Some of Jesus’ closest disciples seem to want a piece of the Master’s action (Lk 22:14—23:56).

Then an argument broke out among them about which of them should be regarded as the greatest. [Jesus] said to them, “The kings of the Gentiles lord it over them and those in authority over them are addressed as ‘Benefactors’; but among you it shall not be so. Rather, let the greatest among you be as the youngest, and the leader as the servant. For who is greater: the one seated at table or the one who serves? …

But as his closest disciples see their master experience the exhausting costs of being a passionate Leader/Servant, their own passion succumbs to fatigue.

When he rose from prayer and returned to his disciples, he found them sleeping from grief. He said to them, “Why are you sleeping? Get up and pray that you may not undergo the test.”

As Luke then tells us, Jesus knows that even his number-one disciple won’t be equal to that test, though Peter says he’s ready.

“Lord, I am prepared to go to prison and to die with you.” But [Jesus] replied, “I tell you, Peter, before the cock crows this day, you will deny three times that you know me.”

Peter proves his Master correct. Judas does also, when, as Jesus foretold, he betrays his Master with a kiss. From that moment on, the cost of discipleship gets too high for those multitudes who once idolized Jesus, and they scatter. Some may even be among those now calling for his crucifixion.

Again Pilate addressed them, still wishing to release Jesus, but they continued their shouting, “Crucify him!  Crucify him!”

They did. But on the way to Skull Place, a subset of the multitudes who once viewed Jesus from afar now see what servanthood got their idol, and they despair. Jesus—teacher to the very end—issues this warning to the weeping:

“Daughters of Jerusalem, do not weep for me; weep instead for yourselves and for your children for indeed, the days are coming when people will say, ‘Blessed are the barren, the wombs that never bore and the breasts that never nursed.’

But this sad account of the dying passion of Christ’s idolizers concludes with a note of hope—not from any of them, but from the good thief crucified alongside Jesus—the one person in this entire gospel passage who got close enough to Jesus to recognize who and what he was:.

“Jesus, remember me when you come into your kingdom.”

[Jesus] replied to him, “Amen, I say to you, today you will be with me in Paradise.”

May this example of a dying sinner’s intimacy with true divinity inspire the rest of us to contemplate the unworthiness of the false idols igniting our passion.